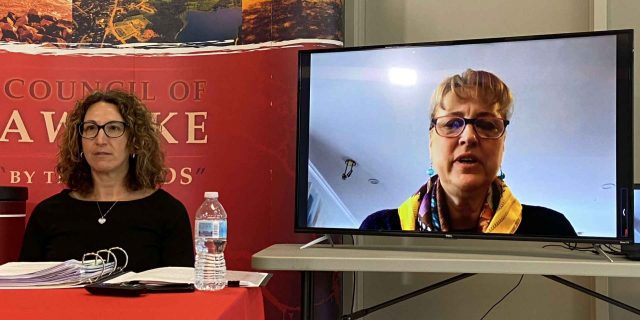 On Wednesday (March 18), the Kahnawake COVID-19 Task Force announced the first confirmed case of the novel coronavirus in Kahnawake.

“I am here today to advise the community that we had a first positive case of COVID-19 in the community,” said Lisa Westaway, Kateri Memorial Hospital Centre (KMHC) executive director.

“In fact, this case is a physician at KMHC. I am also here to tell some good news about this case. I have very recently got off the phone with Public Health. This is a physician who was in New York City from the 7th to the 9th of March. She worked at KMHC on the 11th.

“Her husband actually began to develop symptoms and self-isolated on the 15th of March. And her as well, because her husband exhibited symptoms, she cancelled her clinic at KMHC and also developed symptoms on the 17th. She tested yesterday and received a positive test result today,” said Westaway.

According to the executive director, public health confirmed that the virus is only contagious 24 to 48 hours before exhibiting symptoms.

“Therefore, symptoms were shown only on the 17th. She was contagious up to a maximum as of the 15th, and she had last worked in the community on the 11th. Therefore there is absolutely no need for contact tracing by Public Health or by KMHC in any way. There is no risk to our population or to our patients or to our nurses and other physicians or any residents,” she said.

After the announcement, many residents flooded the comment section of the Kahnawake COVID-19 Task Facebook page with concerns and questions regarding the contagious period and incubation period and criticized the physician in question.

Later on in the evening, Dr. Suzanne Jones, who is part of the task force, released a letter to address some of the concerns expressed by community members.

And on Thursday, during a COVID-19 Task Force press conference, Dr. Jones said, “I really want to sympathize with the community because I know this was a bit of a bombshell. It was a bombshell for community members but also for us as well.

“I know that some people felt that this person acted irresponsibly. On the contrary, I have to take my hat off to this physician because she acted appropriately at the right time. The moment that her partner exhibited symptoms, she self-isolated herself and her family. She did not come back to work here or anywhere else. That was paramount,” said Dr. Jones.

“The 24 to 48 hour period, we actually cannot find any documentation that has linked this virus to this period. However, we know that coronaviruses typically will have this potential risk of shedding (spreading) from 24 to 48 hours.

“When we did our case study of this particular exposure, we used this worst-case scenario. What if it was 48 hours before the symptoms and then we backtracked and counted the days, and that is how we were able to conclusively say without any doubt in our mind that nobody in the community has been exposed,” said Dr. Jones.

The doctor also clarified the difference between the incubation period (14 days for coronavirus) and the contagious period (showing similar signs to the common cold virus, which is 24 to 48 hours).

The contagious period is 24 to 48 hours before people develop symptoms to when symptoms resolve and test negative. Jones and Westaway said that with this particular virus, people are contagious in the hours before they start showing symptoms.

They also explained that as of right now, there is no community spread in the province of Quebe, which is when you have an individual who has the virus, and you cannot trace the initial contact with the virus.

“What that means is that right now, people who have the virus, we can trace their contact. So everyone who has the virus currently has contracted it through travel or has been in touch with somebody who has tested positive. These people can be found in our community and other communities, but that is not community spread,” said Dr. Jones.