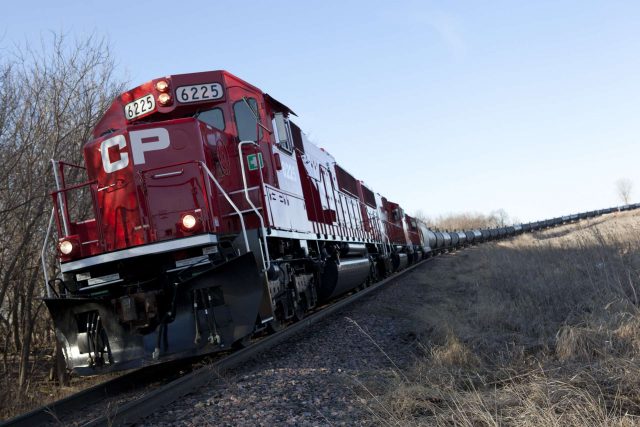 When the trains come to a crossing in Kahnawake, the train crews have to engage their whistles. (Courtesy CP Rail)

After the recent confrontation on the Canadian Pacific Railway (CP Rail) in Kahnawake, the transportation service has been back to its regular job, but the Mohawk Council of Kahnawake (MCK) has received numerous complaints from community members regarding train whistles being engaged when approaching a level crossing.

According to CP Rail management, Transport Canada requires the use of the whistle at all four crossings in proximity to Kahnawake.

Andy Cummings, manager for CP Rail media relations, said the train whistle must be sounded in a pattern of two long, one short, and one long horn, when a dangerous situation presents itself, such as persons or vehicles on the tracks.

“The train must begin sounding its whistle at least a quarter mile leading up to the crossing with the last long whistle held until the train occupies the crossing,” he said. “Whistle use outside of this pattern may indicate a safety concern, such as warning a trespasser of an approaching train.”

MCK chief Lindsay LeBorgne, lead on the infrastructure, transport and operations portfolio in Kahnawake, confirmed that CP Rail has a certain procedure when they come to crossing a road.

“They (CP Rail) blow a horn and it happened to be several crossings that are very close to each other,” he said.

LeBorgne contacted CP Rail to find a solution of the issue, but spokesperson Mike Lovecchio said that is required by law, and the company is responsible for that to avoid an accident.

“According to the spokesperson, quite often there are people on the tracks, or walking with headphones on, or sitting on the tracks, or if they see animals, and that is why by law they are required to blow the horn,” LeBorgne said.

“His hands are tied,” he continued. “Before we come to some of the agreements between us and CP Rail, they have to continue doing that. We are trying to do what we can to work it out with them.”

In his opinion, minimizing an amount of time and the length can be a solution, but according to Lovecchio, it’ll take several months of negotiating to try to work something out.

“We have no choice,” LeBorgne continued. “I know it disturbs people because we have houses that are only a hundred yards away from the train track, so when they blow a horn it is quite loud. It is like on your backyard, so we totally understand it.

“CP Rail is quite willing to take corrective actions,” he continued. “We will also continue to have dialogue with CP regarding other issues or suggestions that may arise.”