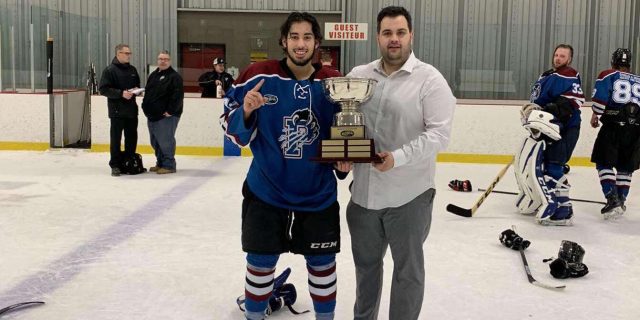 Kahnawake’s Dylan Stacey is a champion.

He picked up an assist as the Cornwall Prowlers built up a 4-0 first period lead on the road last Friday, and then hung on to beat the West Carleton Rivermen 7-5 in the fifth and deciding game of the first-ever Eastern Ontario Super League Finals.

“There’s no better feeling than winning that championship,” Stacey said. “We worked hard as a team every game, and although we didn’t get to win it in front of our fans at home, we still got to bring it back to Cornwall, which is huge for the town.”

Despite taking a 2-1 series lead with a road victory the previous Friday, the Prowlers let a chance to win the title at home slip through their fingers the following night, losing 6-2 to the Rivermen.

“It was a bitter loss because we wanted to win in front of our fans,” Stacey said. “But we just didn’t come to play in game four and they did. But you got to have short-term memory in a playoff series, especially in the finals, or else things will go badly.”

Storm Adams, a 27-year-old forward from Akwesasne, says they had a letdown after he scored the game winner with 14 seconds left in game three.

“We brought that into the next game,” Adams said. “We got too high and didn’t manage our highs and lows. We came in thinking we might have had it sealed and it got away from us the next night, and they came at us hard and we weren’t able to shut them down.”

Stacey and his teammates made sure they put that loss behind them. “We just wanted it more than them from start to finish,” he said. “Every guy in the dressing room was ready to go do what they had to, to win that game.”

“It was just a clean slate,” Adams said. “It was anybody’s game to take. We were at the point of do or die and either we show and get the job done, or we don’t.”

Adams, who is six years older, was able to give the 21-year-old Stacey some guidance as he joined the team as one of its youngest players.

“It was great playing alongside him for some of the games,” Stacey said. “He’s a good player and I definitely picked up some stuff from him during the season.”

“It was pretty cool,” Adams said. “It’s nice to have that familiarity, two guys who go through the same circumstances. There’s a bond when you come from the same roots.”

Adams was full of praise for Stacey and what he brought to the team.

“He was really impactful for us, especially for a young guy,” Adams said of his sometime linemate.

“He had a strong playoff and had some big points for us.”

As for Stacey, he has plans to hit the gym all summer and come back even stronger in his sophomore season in the expanding league. A team will be added in Alexandria and Stacey hopes to return to that town after playing two years of Junior. But he remains grateful.

“I was just happy the coaches took a chance on me this year,” Stacey said. “I’m nothing but thankful for the opportunity to keep playing this game at high levels.”