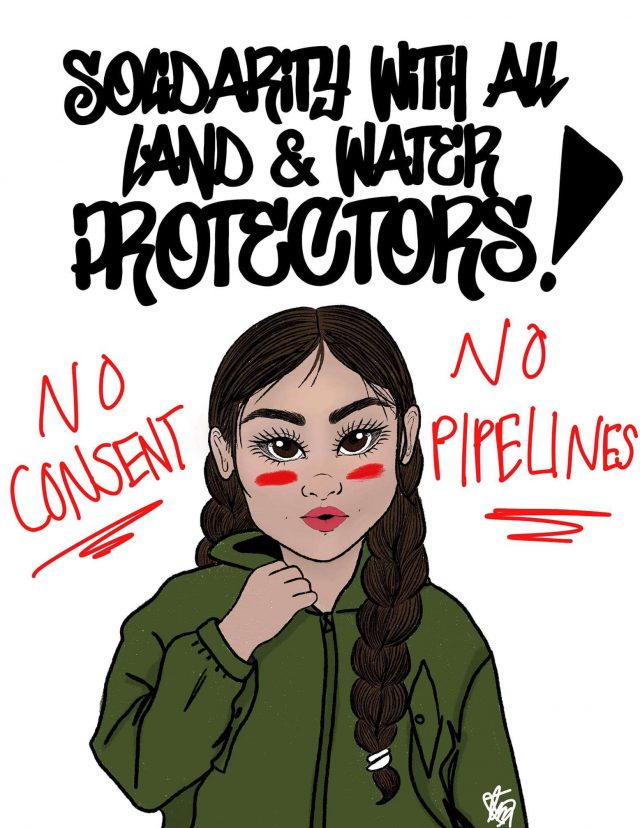 Kaiente:ri Tyra McGregor has a deep love and appreciation for Frida Kahlo, often drawing in similar cartoon-like fashion, emulating one of the most famous Indigenous artists in the world, whose popularity continues to rise long after her death.

Although she said she doesn’t draw old school selfies of her own image, her family and other observers often remark how uncanny a resemblance her art is to her looking in the actual mirror.

“I’m not the greatest with articulating my words into meaningful full sentences so I pour my emotions into my art and hope to explain it that way,” McGregor told The Eastern Door recently, after her latest creation, about the blockades, was put on Facebook.

The local teen is using her amazing talent to express herself in the ongoing issue, where community members have set up at Adirondack Junction to raise awareness of the pipeline fight in Wet’suwet’en, BC, which was erected after Tyendinaga was attacked by the Ontario Provincial Police for their own rail blockade.

“I happened to draw that while I was really upset with our situation and how the world works for the Native youth,” she said.

“Everything happening with our people, especially our youth; the hurt our communities feel, the persistent never-ending trauma. Our youth stand for peace and we shall prevail for future generations and many more to come!” she said.

Art, as those who have the drive and talent to do it will attest, is a form of healing. It is also a way to express without having to stand on a pedestal and shout out your thoughts.

“I have excess stress and anxiety that when I delve into artworks it drifts away and I finally feel at ease, a coping mechanism if you will,” she said. “If I can’t explain how I feel, hopefully my art conveys it.”

McGregor is conscious of how people see her in what she creates, but she never sets out to do self-portraits.

“Never at all! My family always says this when I finish a project,” she said. “My mother recently said it was a quirk, not to say I’m anything like the magnificent Frida Kahlo, but she frequently painted herself because she knows her self best and my mom said this may be the same thing I subconsciously do.”

Her ista Colleen Wahienhá:wi Brown-McGregor knows her daughter best, of course, and she said while drawing or painting, or creating art in whatever way; “Her best self comes through, her confidence and passion for life.”

The paintings on the family’s wall at home start from six years ago, when Kaiente:ri was 13.

“I am very proud of her,” said Wahienhá:wi. “Tyra has had her own trials in life and it has been truly a healing tool. She is at her most creative (while painting). It is a true expression. I have seen how comforting and relaxing it is for her.”

The burgeoning artist will often gift her creations to her family, a way to spread her art, but also to express herself when words escape her.

“I came home from work, she said ‘mom I have been thinking a lot about what is happening amongst Onkwehón:we.’” said Wahienhá:wi.

“When she showed me this piece, I was filled with so many emotions. She has always shown her passion for life in her illustrations.”

So how does the self-taught artist she set out to create such beautiful work with no formal training?

“I don’t usually have a set plan in mind,” she said. “When I feel in a funk, I start off with a doodle, then it shapes into a being or representation of what I feel.”

In terms of the blockade piece, it was Kaiente:ri’s way of adding her important voice to the mix.

“I’ve gotten a few shares, which is cool. I just wanted to contribute to the situation somehow to raise awareness, if it wasn’t so prominent already,” she said.

“Our youth are conscious and we have our ancestors with us. We shall rise!”