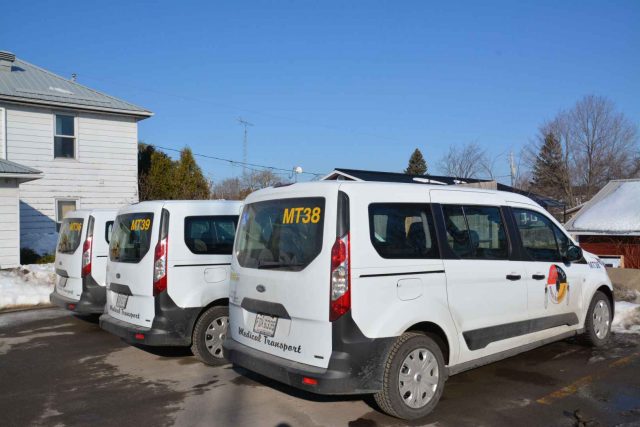 “Through Health Canada, we supply vehicles to take people to doctor’s appointments and tests and things like that,” said KFB chief David Scott.

“Every three years, as per our agreement we have with Health Canada, due to the wear and tear and the mileage on the vehicles, we replace them with new ones,” he said.

Medical Transportation now has seven vehicles in total, which includes a handicap van purchased in December, and a Ford Taurus, that is used for the elders, as it is easier for them to get in and out of a car than the van.

Community members wanting to use the service need to provide 24-hours notice of their medical appointment so it can be added to the dispatch system.

Daniel Jacobs, the supervisor at Medical Transportation, said that they are open Monday to Friday from 7 a.m. to 6 p.m. and have four dialysis patients on Saturday, with one driver on call.

According to Scott, Medical Transportation currently has 32 employees, including nine drivers and two dispatchers.

Jacobs said that in all, drivers complete 30 to 40 trips per day, five days a week, and services.

“Our budget is through Health Canada to run the whole operation, and it is separate from the funding we receive for the Fire Brigade. We used to be on a replacement program where we could put money away, but that was removed from our operations,” said Scott.

“This time around, we made a request to have them replaced, and it took a little bit longer because they are changing the rules and regulations at Health Canada. And the okay came in through them in July to replace the vehicles,” said Scott.

Since the Ford Flex crossover SUVs are no longer being manufactured, the KFB switch to the new Ford Transit Connect Wagon van (for the five new vehicles).

“Right now, we are running efficiently. We are never over budget. We supply an excellent service,” he said.

Because Medical Transportation completes around 19,000 trips per year and drivers clock in about 5,000 km per month, they have to replace the vehicles after the warranty has run out. Otherwise, it becomes a cost, said Scott.

On occasions when the demand is higher than normal, the service borrows the fire brigade car.

“The employees are paid to the scale that is across the country with other medical transportation services. They have full benefits, including a pension plan and unemployment. They are taken care of. They get vacation days. They have sick days and personal days, which are benefits that they did not have before,” said the chief.

The service takes community members to the Kateri Memorial Foundation Hospital as well as to all the major hospitals in the area. And because of a change to the province of Quebec’s medical test appointment system, Medical Transportation has also widened the territory they cover.