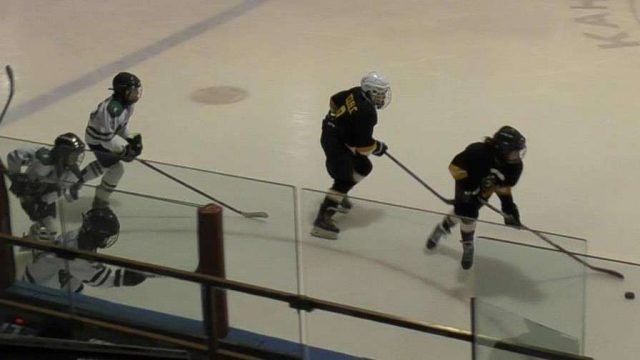 Two Kahnawake Mohawks are being pursued by three HRS Hawks. This was their one and only matchup during the regular season. (Courtesy Baby Blue Memories)

After 18 long games, the Atom A Mohawks became regular-season champions after a 7-3 victory over the HRS Hawks at the Kahnawake Sports Complex on Tuesday night.

The win put the team as the first seed in the playoffs with a 16-2 record, beating out the former league-leading Chateauguay Ducs, who had a 13-2-3 record.

“It feels great,” said Ronnie Stacey, Mohawks’ head coach. “There was hard work on-and-off the ice. Both players and parents committing themselves wholeheartedly to this team and buying into my plans, regardless of the insanity.”

Ryden Norton opened the scoring for Kahnawake, 57 seconds into the first period with a great assist from Rowehrenhatie Jacobs. Jacobs intercepted a pass at centre ice, stickhandled through three defenders in the offensive zone – causing two Hawks defenders to collide into each other – and centred a pass to Norton for the game’s first goal.

After forfeiting two straight goals from the Hawks, Kahnawake bounced right back on the power play. Jacobs poke-checked the puck loose in neutral ice and stickhandled through a defenceman and goaltender for the Mohawks’ second score to tie it at 2-2.

The tie was short-lived as the Hawks answered right back to make it 3-2. Rohahiio Diabo of the Mohawks tried to help his team with a backhand shot that the Hawks’ goaltender saved but coughed up the rebound.

The puck was left for Jaxton McComber who could not get all of the slap shot but it found its way to Rome Delisle, who lifted it over the goalie’s glove to tie it at 3-3 with just over nine minutes in the second period.

The Hawks saw an opportunity to take back the lead on the power play but Marcus Rice of the Mohawks had a tremendous individual effort, stealing the puck from the neutral zone. Rice fought through three defenders on his own until he was backchecked. The puck jarred loose but ricocheted back to him from the half-wall and he scored on the backhand for an unassisted short-handed goal, 4-3.

Kahnawake continued their assault in the second period on the power play with a faceoff win, as Kallen Stacey took a shot from the point and was stopped with a glove save. The puck could not be corralled and Diabo picked up the rebound to score and make it 5-3 going into the third period.

The Mohawks lost a faceoff in the offensive zone but Arahkwenhawe Two Axe swooped in and stole the puck after HRS won the draw. Two Axe made a centring pass to Ryan Stacey who scored on a one-timer to get her first goal of the season.

“I heard the crowd go nuts,” said Ronnie. “I was more than happy for her. She worked hard all year and had so many chances to score throughout the season that just didn’t go in. It was awesome that she was able to notch one.”

Delisle capped off Kahnawake’s final goal of the night as he went coast-to-coast from his end to the other, splitting through two Hawks’ defencemen, beating HRS’s goalie over the glove for an unassisted goal as his second score of the game, 7-3.

“Not quite the best that they can play in the first (period), but they were dynamite in the second and third,” said Brandon Bordeau, Mohawks play-by-play commentator.

The win marked a regular-season championship for the Atom A team. The last Kahnawake Mohawk squad to win that title was the Midget A team in 2016.