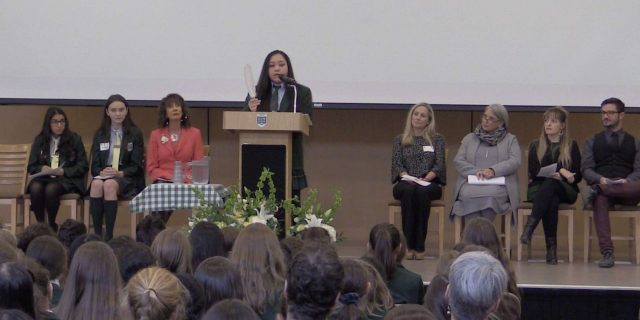 During her school’s 110th anniversary, young Kahnawa’kehró:non Rayne Aonhawinonno:rón Stevens was chosen to be a special speaker and gave an impassioned speech on the effects of colonization. She then won a speaker of excellence award.

“Let me start off by saying that my father (Conrad Stevens) is one of the strongest people I know. Because he was a victim of the Sixties Scoop, his culture, language and family were stripped from him, and he was put into foster care, where he grew up in abusive non-Native homes,” said Stevens to a room filled with over 300 people last November.

“Let me continue by explaining my experience in all of this. My mother made the difficult decision of putting me in a French school outside of my reserve, where I would not be learning any aspects of my culture, nor engaging with my community. In her mind, this was better for me.

“The other kids made ignorant and hurtful comments, some I still think about almost every day. I never quite understood why they saw me so differently, even though I barely knew anything about my culture. It almost felt like they knew more about me than I knew about myself,” she said to the crowd.

Stevens said that her journey of self-discovery started when she transferred from the French school, where she often felt isolated, misunderstood and excluded, to Miss Edgar’s & Miss Cramp’s School, an all-girls school in Westmount.

Her former classmates often referred to her as “the girl from Kahnawake,” and once she started at Miss Edgar, she said she felt welcomed and that it was a more inclusive environment.

But right away, she could tell that many of her new classmates had grown up in a privileged community with very little diversity.

At the same time, Stevens’ mother, having witnessed her daughter’s ongoing struggles with identity, decided to enroll her in a cultural group for young girls.

“Her and I really didn’t know much about the culture,” said Kareen Diabo. “I grew up as catholic. And that was always a struggle for me, and I saw that it was becoming a struggle for her.”

The group was called Oheró:kon (Rites of Passage).

During a weekly school assembly, Stevens said that those feelings she had at the French school suddenly came rushing back.

“Before every assembly, they give an acknowledgement that this land is on ancestral Mohawk land, and I heard some girls that were in my grade saying ‘who cares’ and laughing. I don’t know why but that really stuck with me,” she said.

She even heard a teacher joke about it.

“It’s only three seconds, and yet they were bothered by it, and that bothered me,” she said.

That is when she decided to write an email to the school principal, Lauren Aslin, in which she told her what she had overheard and seen.

“She seemed very touched and very bothered by it as well, and that really made me feel like I was being listened to, which was something I had never felt,” said Stevens.

After having a conversation with Aslin, Stevens suggested that she be allowed to say the Ohén:ton Karihwatéhkwen at the start of the weekly assembly. And according to Stevens, Aslin was very open to the idea and allowed her to proceed with her request.

The young teen said she was extremely nervous and had never spoken in front of a crowd before.

Steven describes herself as shy and reserved and said that when she was on stage, she tried to imagine that her ancestors were with her. She kept telling herself that what she was doing was important.

“I was showing those girls what my culture was about, and that was really important to me,” she said.

Her mother credits the fasting group for giving her the confidence she needed.

“It made me proud, and I saw the change in her,” said Diabo.

“I had more people asking me about some words. I always hear them trying to practice it. I had these girls from middle school ask me if I could teach them a phrase for a presentation they were doing,” she said.

Fast-forward to last November, where she was tasked in writing a persuasive essay about any topic of her choice for an English class, not knowing that the school would be selecting a few among them for their 110th-anniversary event.

“My father started talking about his childhood, and that is something that has struck me, because it is a very emotional story, and I wanted to portray that somehow. What he has been through is colonization, and I tied it into how I have been affected by colonization, and I thought that was perfect.”

“Her father and I are so proud. It is incredible. She is our only child together, and she makes us proud all the time,” said Diabo.

Stevens will be graduating from high school this spring and hopes to pursue a degree in psychology to one day help other Indigenous children.

“I feel like there is an advocate in me. I really want to advocate for my people and all the Indigenous Peoples in the world, and I want to shine a light, and I am really trying to find my voice, and I feel like I am developing it,” said Stevens.