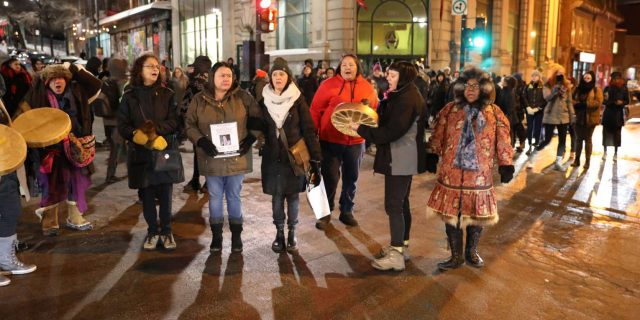 The MMIWG vigil is looking to attract families that are directly affected, to share their stories in a safe space. (Courtesy Dayna Danger)

Instead of a march, organizers held a vigil last Friday for the Missing and Murdered Indigenous Women and Girls (MMIWG) memorial.

The vigil was held in Montreal at the Native Friendship Centre, coordinated by lead organizer Dayna Danger, who works for Missing Justice, a solidarity campaign for murdered and missing Indigenous women, girls, two-spirited and trans people.

The campaign is focused on raising awareness of the violence and discrimination against Indigenous women living in Quebec.

“This is a pretty special year because we are seeing more dialogue between different organizations and with family members and folks in urban centres,” said Danger.

“There has been a lot of work to bring people together and go back to the root of what the memorials were.”

Danger explained that for many years, family members of victims did not attend the march, so organizers wanted to refocus their attention on them.

“The vigil is really about taking that time to remember those who have been murdered, who have gone missing and for a lot of the cold cases, because there are many of them,” she said.

The vigil started at 5 p.m. and many people, including family members and elders, got the opportunity to talk.

“We took to the street at the end. We blocked off the Ontario and St. Laurent corner, and we made a human circle. We had the family members and the elders and Indigenous people in the middle.

“We were singing songs and Buffalo Hat Singers were there too. We had a Mohawk elder and an Inuit elder. We had a couple of family members and some people that were representing them,” said Danger.

According to Danger, over 200 people showed up to the vigil.

Jessica Quijano, coordinator of Iskweu, a project affiliated with the Native Women’s Shelter of Montreal, said, “We also took the opportunity to put forward Donna Pare, who has been missing since December 2018. She is Inuk, and there has not been much development in her case. So we talked about her, so hopefully, someone can come forward who might know something,” said Quijano.

Danger also said that she was really impressed with some of her volunteers because they organized an action in the metro the morning of the vigil during rush hour.

The volunteers printed out statements from families from the MMIWG final report, both in French and English, and passed them out to people on the metro.

“The feeling was really powerful. It was really thick in the air because you have to recognize that family members haven’t been at these vigils for many years now so that you could feel the energy in the air,” said Danger.

“It was something very electric and powerful. It was positive but heavy because we are talking about people that are directly affected by this crisis. It was very loving.”

Danger, who is Metis and Saulteaux from Winnipeg, has been helping organize the memorials through the Centre for Gender Advocacy for three years now.

“This is something that has always been very important to me, and it is my way of contributing back to my community that I care about so much. I think MMIW is really foundationally built on its relationships in how we come together and support each other.”

She added that although these vigils don’t stop the crisis, they bring compassion, love and understanding to what people are going through. And they allow families the opportunity to express their memories for their loved ones.