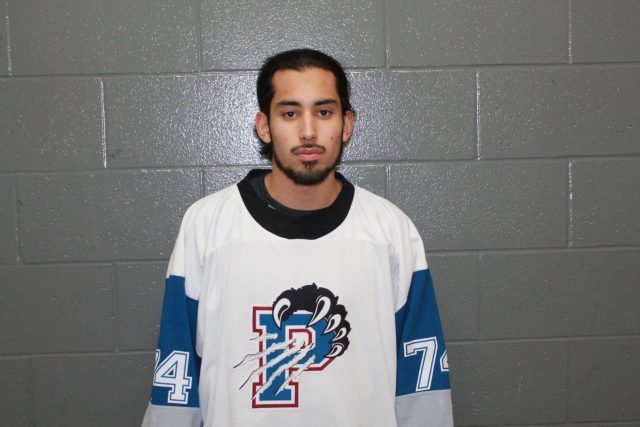 Dylan Stacey is taking the Cornwall Prowlers and the Eastern Ontario Sr. A Hockey League by storm. (Courtesy Dylan Stacey)

The old adage in sports is that speed kills. And Dylan Stacey has plenty of speed to spare.

Even as a 20-year-old rookie on the Cornwall Prowlers, he is the fastest skater on the team.

His coach/general manager/ owner Mitch Gagne said that’s exactly why he brought the player from Kahnawake on to his team.

“Dylan is one of the fastest guys in the league,” Gagne said. “He’s pretty much the whole package and sees the whole ice very well. He’s a great skater and he’s got that speed.”

Stacey made the jump from Junior B to the newly formed Eastern Ontario Senior Hockey League and Senior A this season.

“A is pretty fun so far,” Stacey said. “I was expecting it to be a faster pace of hockey but I’m one of the faster ones so it makes it easier for me to make decisions with the puck. So it’s all pretty fun for me this year.”

Stacey was desperate to make the jump to the next level. He was playing with the Junior B Alexandria Glens last season.

“He was definitely wasting away in Junior B,” Gagne said.

“I’d say he’s right with that comment,” Stacey said. “But I really didn’t have a say in playing at a higher level due to one guy ruining my chance at playing Junior A because he wouldn’t release me from his organization. So I played out my career in Junior B. That’s what happened and I can’t change the past.”

Stacey has been making the most of his chance at the next level so far with the Prowlers. He is averaging more than a point and a half per game. “My strengths are my speed, skill and vision on the ice,” Stacey said. “I see a lot of openings that some guys don’t see. So that’s what separates me from different players.”

He had six goals and 10 assists in 10 regular season games., which is why Gagne is comfortable placing Stacey almost anywhere in the lineup.

“We’ve had him play top six most nights,” Gagne said.

That means putting him on a line with players 10 to 12 years older than he is.

“I enjoy being the young guy on the team, to be honest,” Stacey said. “I take in a lot from watching some of the guys on my team, specifically the forwards. I’m learning more and more as I play at this level and it’ll help me improve my game even more. I’m just enjoying the experience in my first season.”

The Prowlers are facing a do or die semi-final game at home tomorrow (Saturday) at 3 p.m. They are tied at one game apiece with the Deseronto Bulldogs for a spot in the finals.

Stacey missed the opening game last Friday, a game Cornwall lost. But he had a terrific excuse, his girlfriend Kanen’tenha:wi Montour gave birth to their son Karter last Wednesday, five weeks premature. All are home and doing well. Stacey made the second game, a 10-3 blowout win.

“I honestly love playing in games with a lot on the line because it makes me more excited and pumped up to go out there and make plays on both sides of the puck. I’m excited and can’t wait to get things going on Saturday.

“I believe we’ll win, we’re the best team in the league in my opinion and we have what it takes to win the championship this year. Gagne knows he has a young player with a bright present and future.