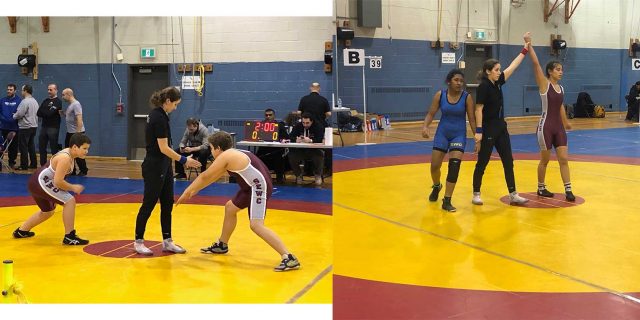 The Kahnawake Survival School Wrestling Club entered a total of six wrestlers and were able to grapple their way to two gold medals along with four silver medals.

Experience was the main takeaway in this tournament for both clubs.

Survival School head coach Ryan Rice emphasized the importance of the team getting this experience and reps in against other wrestling clubs.

“We want them just to feel what it’s like wrestling a tournament with a real referee, a real score table and their parents cheering for them,” he said.

Along with the success their wrestlers had collecting wins and medals, matches were lost and a lot of nerves were shown. Rice elaborated on the fact that there are still a lot of technical things that their wrestlers need to work on.

However, the team’s fighting spirit cannot be overlooked as Rice pointed out. “The thing that impressed the coaches, is the kids are fighting,” said Rice. “Some of them are wrestling kids that are more experienced, more developed, more skilled, but they’re not giving up in the matches. That’s very important.”

For KSS, some of the wrestlers that stood out were Nane Diabo, Cy Deer and Kehson Jacobs. With the Screaming Eagles, Tatie Jacobs, Slade Two-Rivers, Tharahk and Hento Stacey and Dylan Delisle were some of the standouts of the group.

Diabo who had a strong outing in the tournament, acknowledged that despite winning gold, she still has room for improvement.

“I need to work on everything overall,” she said. “My cardio can be better and my technique can be better. You may have won gold but you’re never the best, there’s always something you can improve on.” Along with her coach, Diabo saw her team’s fighting spirit, especially with some of the younger wrestlers.

“They’ve improved so much in practice, they trained so much, they go to all their practices and they’re always excited to be on the mat,” she said. “We took a couple of losses today but I believe in the next couple of practices we’ll build on those.”

Kehson Jacobs, like many of his teammates, enjoyed the team’s first tournament of the year. However, despite not getting the results he wanted, he still felt he performed well, and ultimately needs to work on several aspects of his game.

He has high hopes for his team in future tournaments to come. “I hope we do really well as a team and hopefully start it back again like it was in the 80s,” said Jacobs.

Jacobs, Deer and Diabo are all prospects to win gold medals at the GMAA championship, which will be held at Massey-Vanier High School February 13.

Before the championship, the two clubs will have meets with Vincent Massey High School and Howard S. Billings, not only to prep for the GMAA championships but also to give their wrestlers more experience to develop their game to the next level.

Support from family and locals is something the young wrestlers can use as motivation in the tournaments to come.

The Kanien’kehá:ka Tehontatienas Mohawk Wrestling Club is coached by Peter Montour, who acknowledged both the wrestlers and coaches have work to do.

“At Riverdale there was no pressure; it was a learning tournament and our athletes wrestled as such,” he said.

The team was originally supposed to wrestle at the Ragnarok tournament in Ontario but inevitably had to fall back on the Riverdale tournament. Montour believes his team lacked focus at times. “They know what they have to do, they have to bring that compute level onto the mat in time for provincials and nationals.”