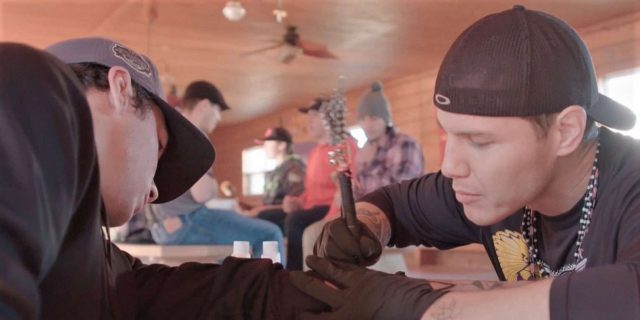 Artist Kanentokon Hemlock has been doing tattoos for two years. He took time to consider what the story was about in the episode and reflect on what would be important in the show. (Courtesy Jason Brennan)

The second season of Skindigenous, the documentary series on the art of tattooing, feature Kahnawake artist Kanentokon Hemlock, and it will be aired January 21 on APTN and PBS.

Produced by Nish Media, each of the 13 episodes explores the ancient tattooing tradition of one Indigenous culture from around the world focusing on this art, its techniques and symbols as well as on people’s lives and their spirit.

Karonhiarokwas Roxann Whitebean, scriptwriter and director of two episodes, said the whole idea of the series is to visually document tattoo revitalization by Indigenous people.

“Tattoo culture was oppressed for almost 300 years,” she said. “If you look at paintings of warriors, they were highly decorated with tattoos, but they didn’t just get them because they wanted to have something nice on the body, they had to earn these tattoos.”

With the arrival of European settlers suddenly tattoo practices were greatly oppressed, she continued.

“As a director I’m happy that I’ve been entrusted to document these historic moments about how Indigenous people are bringing tattoo culture back to the communities,” Whitebean said.

She believes Hemlock is part of revitalizing this portion of Indigenous culture, and “it is really exciting to witness it. I appreciate that Kanentokon and community members agreed to work with me,” she said.

“I received nothing but positive feedback from the network, so I’m certain that his episode will make the community really proud of the work he is doing.”

She thinks Hemlock plays a leadership role in the community, working with the youth.

“He is very much involved in language revitalization,” she continued. “He works at Kahnawake Survival School, and I think that this is something that we’ve been lacking in mainstream media, showing and portraying those positive male role models who are Indigenous.”

New information about what Indigenous people do in their daily lives all around the world makes every episode unique, she said.

“What is interesting about Kanentokon’s episode is that we were able to document the first tattoo to ever be given in the Longhouse in Kahnawake,” she said.

Whitebean thinks the interesting key points in the series are the artists’ own stories.

“Documenting these moments are incredible,” she said. “Because it is something humanity hasn’t really had until the advancement of technology, and usually it is always been written, but now we are able to actually film these people where they can stand in front of the camera and tell us their own stories, and we go shot by shot to compose the

film, with respect to others.” “I’m really honoured that

Jason Brennan gave me this opportunity to work with his team at Nish Media; they are a wonderful team, they work really hard.”

Producer Brennan said the story pitched by Whitebean was great because Hemlock is a cultural tattoo practitioner who is aware of the protocols that exist in his traditions, “so for us that was important, for sure.”

Brennan thinks there is a big interest in tattooing around the world today, and “in most of the cases, tattooing in Indigenous cultures. It was almost lost due to colonialism,” he said.

“More and more people are recollecting that back and I think tattooing allows us to look at that aspect of reclaiming something.

“The fact that now people are doing that openly, it shows that some of the freedom was regained in terms of not fearing,” he continued.

“You have that free choice to wear your culture on your skin,

and that’s obviously a symbol of freedom and cultural pride.”

Brennan hopes people will keep getting inspired by the series and “see all the great work that has been done by all these revivalists.”

A tattoo master, Hemlock believes it is important to tell stories from local perspectives “and to share our truths with the world.”

“Our ancestors used to do it a long time ago,” he said. “When colonization had occurred that oppressed the tattooing traditions, it became kind of taboo, but revitalizing it is almost like decolonizing our bodies and our minds around tattooing here, so it is a form of freedom.”

Hemlock said this art has much more than ornamental value.

“They (tattoo) had personal telling,” he continued. “They could’ve been done for personal purposes, or for protective measures, or whatever it might be, it was their (ancestor’s) freedom to determine, to put these symbols of this language drawn on their

Before using a certain traditional symbol used by his ancestors, Hemlock has to do a lot of research on the meaning of it.

“This is a learning process for me,” he said. “I have had an opportunity to learn from Mike Galbane, from Arizona, he is a really helpful and good mentor. He put me in the right direction of traditional practices.

“He was able to share with me what was the traditional method of ink back then, too,” Hemlock said. “So, I’ve been using that method in my tattooing.” He said there is a lot of interest among people to get tattoos done, “but I’m trying to follow a protocol and to determine the proper symbols that go on people’s bodies.

“I have to keep in mind how serious our ancestors took this tradition,” he said. “I need to have the same respect for that too.”