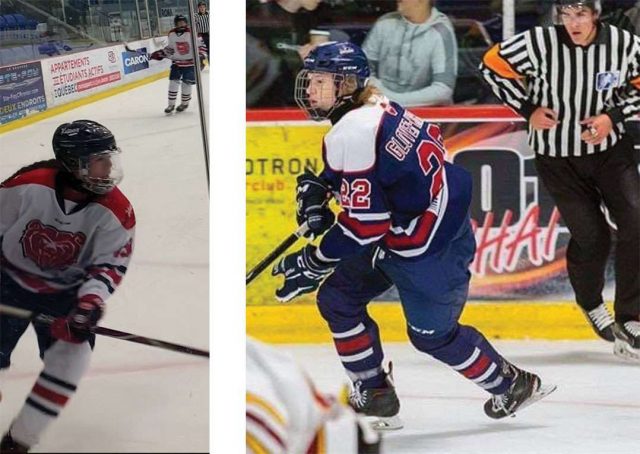 Two Kahnawake hockey players have been chosen to represent Team Eastern Door and the North at the 2020 Aboriginal Hockey Championships in Regina, Saskatchewan, in May.

Forward Trey Deere, 15, and defenceman Reece Glover-Kirby, 16, made the boys team after a tryout in Quebec City over the weekend.

“It feels really nice to be representing Kahnawake,” said Deere. “The tournament is really fun and I’m excited to go back.”

Sixteen players were selected to the main roster and six alternate players – with Kahnawake’s Jayce Delaronde as an alternate – after an intense weekend of drills and scrimmage.

“We had 45 minutes of drills and I didn’t do too well,” said Deere. “I had to do well during scrimmage to impress the coaches.”

“We did a lot of games because there were a lot of people there,” said Glover-Kirby. “I had to play my game, that’s all you have to do.”

Making the team was more difficult than last year because of the increase in athletes trying out, according to both players.

“There were a lot more people than the last time I was at the camp in 2018,” said Glover-Kirby.

“There were a lot of kids this year and it was going to be hard,” said Deere. “I wasn’t confident that I’d make the team, but I had to put my head down and just go through it.”

The parents were pleased with their children’s accomplishments since the difficulty of making the team gets higher each year.

“I’m a proud dad seeing that he’s representing Kahnawake and hoping he can take home the gold,” said Tyler Deer, Trey’s father. “He’s a leader on the ice and he can throw a big hit.”

“I’m always proud of him,” said Derek Kirby, Reece’s father. “He gets the team involved and he’s not shy to mingle with team members.”

Reece had three assists in 28 games with the Chateauguay Grenadiers. He will resume his season this Friday after a holiday break which lasted almost a month.

Some players who have participated in this tournament have gone on to the NHL, according to Ken Thomas, director of sports, culture and recreation at the Federation of Sovereign Indigenous Nations.

Most recently, goaltender Roddy Ross of the Seattle Thunderbirds played in three editions of the tournament. He was drafted by the Philadelphia Flyers in the 2019 draft in the sixth round, 169th overall.

Last year, Team Eastern Door and the North finished with a 1-2 record. They lost to Saskatchewan, 7-1 and Alberta, 5-3 in the round-robin. They rebounded with a win against New Brunswick, 1-0 to claim eighth place in the consolation playoffs.

The tournament is being held for the fourth time in Saskatchewan and will be held at the Co-operators Centre.