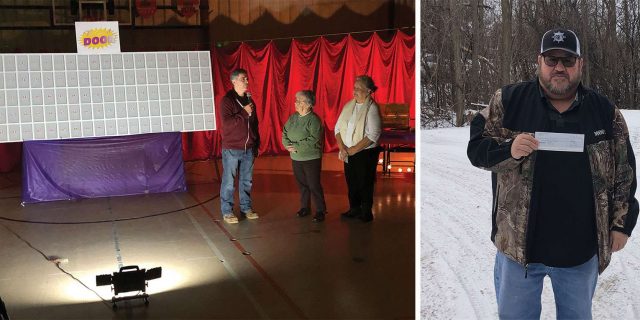 To say the Secret Door fundraiser was successful would be a big understatement.

What started out as an idea of this reporter years ago, turned into months of selling, sponsors, buyers and supporters coming together from multiple Native communities, resulted in over $56,000 raised for Reviving Kanehsatà:ke Radio to help them rise from the ashes.

The way that money was raised ended up being a unique and enjoyable evening for the 50 or so people who attended December 20, with K103 Radio’s Paul Graif as MC.

“It was a fun way to raise money where the participants were guaranteed a payback while hoping to win the big cash prizes,” said Karahkó:hare Syd Gaspe, recounting the night.

“It also ended with an exciting evening with the way all 100 Secret Doors revealed a prize. The response was overwhelming from our sister communities of Akwesasne and Kahnawake, demonstrating how we can all work together towards a common goal; the promotion of our language, culture and identity. Radio and multimedia are important tools to achieve this,” he said.

The grand prize of $20,000 went to Tommy Taylor, a reluctant player who originally wanted number 34 but it was taken.

He was called back the next day and convinced to take one of the three remaining numbers.

His number, 68, turned out to be a good choice.

Every single door won something – which the large majority of games simply do not offer.

If you played, you won.

“The funds will go to rebuilding the radio station in Kanehsatake,” said Gaspe. “It has been off the air for two years now. The building is completely condemned and unusable. We are going to move to a better transmission site with better coverage and more power.

“This means all new equipment, including a tower, antenna, transmitter and studio gear. Many in the community are anticipating it getting back on the air. They miss it, they want to know what is going on in the community, they want something to call their own, they want to hear the language. And not to mention play radio bingo!” he said.

The night also included two Kanien’kéha teachers, Mina Beauvais and Warisose Gabriel, saying a few words in the language, about how beautiful and important it is to hear the language being spoken; a nod to two students who had played the game as a group and were sitting in the audience; and Travis Gabriel, RKR board member and life-long learner of the language who lauded those teachers, from whom he learned the most.

“When I took the language course a few years ago I was able to actually carry on conversations with people and when I’d give presentations, I’d do it in the language,” said Travis.

But his speech that night came with a lesson. If you don’t use the language, you’re going to lose it.

“Unfortunately I have started to lose a lot of what I learned,” said Travis. “It’s hurtful, to come that far, and to start losing it. And I make that connection to not hearing it enough, to not being able to verbalize it enough, and not having someone to communicate with.

“So when we decided to bring this radio station back, we decided to make that our goal, to bring the language and culture back so we can hear it. So when someone is sitting behind the mic, you can hear our language,” he said.

As president, Gaspe’s efforts to re-launch the station have been vast – and time-consuming.

A business plan is being worked on and a proper site for a station is being scouted, but there are few locations that properly suit a tower, especially with mountains in the way.

But it won’t deter him and his vision.

“It has played a huge role in the past by touching people from a simple birthday wish over the air to communicating vital information during the 1990 rising in Kanehsatake,” said Gaspe. “There is a lot of support for this kind of positive endeavor in the community.

“In the meantime, broadcasting may resume this coming spring using the existing antenna and some borrowed equipment. Funding will enable to pay utilities such as hydroelectricity, phones, Internet and a website.

“Funding proposals are in the works for 2020 to ensure training and employment. Our mission is to promote our Mohawk identity including language, art, history, values and traditions and our vision is to make it a sustainable endeavour for the seven generations to come,” he said.

To help the station, to donate, or even just to offer a few words of encouragement, you can contact 1017rkr@gmail.com, or Reviving Kanehsatake Radio on Facebook.