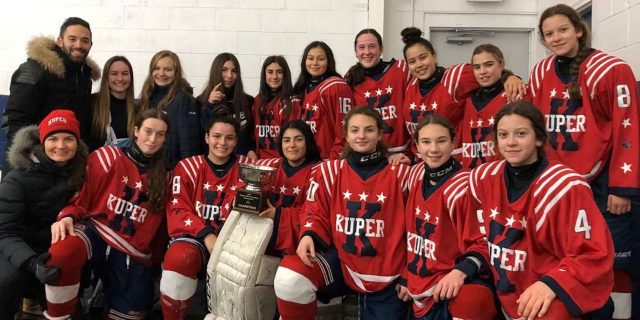 The Kuper Academy Kodiaks had a +8 goal differential while going undefeated in the tournament. (Courtesy Breeze Lahache)

Another championship comes back to Kuper Academy.

The Kodiak Juvenile girls hockey team placed first at the Pingree in Hamilton, Massachusetts on Sunday.

The team beat out five other clubs in a two-day event, including a 4-2 win over North Yarmouth Academy in the finals.

Kahnawake’s Breeze Lahache was among 15 girls, along with head coach Britt Privee who took home the title.

“We played all together as a team,” said Lahache. “We were setting up plays, passing the puck more than usual and having set plays that worked.”

The victory came with a price as three girls suffered tournament-ending injuries.

Katrina Julien and Isy Miron of the Kodiaks had broken collarbones. Lahache suffered a concussion when her head smacked against the ice after a crosscheck from behind.

“I was really upset when I got injured 20 minutes into the first game,” she said. “I had to watch from the stands for the rest of the weekend.”

“I kept in contact with her during the tournament,” said Jesse Lahache, Breeze’s father. “She was still having headaches and dizziness so I told her not to go play.”

Breeze was in a daze from what happened to her once she absorbed the hit.

“I had no clue what happened,” she said. “I had to leave the game immediately as I was dizzy and felt very sick. I had to get checked out by the trainers.”

She still is feeling the effects of the concussion several days after the tournament.

“The dizziness stopped but the constant headaches and tiredness are still there,” said Jesse. “She will be missing a lot of hockey the next two weeks with both teams (Kuper Kodiaks and AA Mont-Royal Outremont Elites).”

The injury did not stop Breeze from keeping herself involved with the team.

“I was the water girl and stick manager,” said Breeze. “The girls did hassle me but it was all jokes and fun.”

Despite the abridged ice time for Breeze, it came out a happy ending for her Kodiaks.

“It makes me feel great because after all the injuries my team has suffered throughout this tournament, they still managed to pull through and win it all,” she said. “The bus ride back was fun.”

“I’m proud of her and her team,” said Jesse. “Breeze can be a competitor when she needs to be and she does not like to lose.”

Kuper Academy opened with a 5-0 rout over Beverly High. Breeze scored a goal in the first period, moments before she was injured. Julien suffered her broken collarbone in the same game.

The Kodiaks defeated the host team Pingree in a close game, 3-2 to advance to the finals.

Miron had her injury in the final game against North Yarmouth Academy.

Breeze will miss her tournament with the AA Elites this weekend due to her concussion, according to her father. Last year, Breeze and the Kodiaks placed second in the same event.