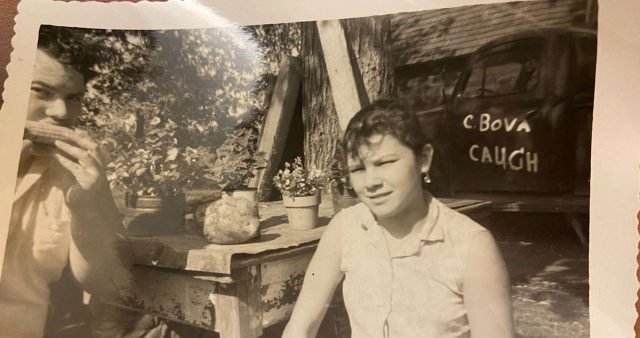 Clarence Bova was 12 when he got his first job at Century Metal, a big scrapyard in Ville Saint Pierre. (Courtesy Clarence Bova)

Clarence Bova, 75, opened his first business in 1979. He transformed his old garage into a kid’s paradise with pinball machines and Pac Man and, of course, pool tables.

“I just turned it into a place where kids can hang out,” said Bova. “I had about 10 arcade machines.”

Bova ran the arcade for about 18 years, closing down in 1997, only to open two more businesses afterwards.

The arcade was near the protestant cemetery right across from Robert Patton’s carpentry shop.

The entrepreneur explained that he got the idea from some friends of his who had an arcade business in Valleyfield.

“I made a good living, but I put a lot of hours in. It opened at noon, and it sometimes closed at 11 at night, seven days a week,” he said.

The arcade did not have a name, but it became very popular with the town’s youth from the get-go, and saw three generations grow up.

“The Horn kids grew up there. The Rice kids too, and some of the Diabos,” said Bova.

Bova said that kids of all ages would come and hang out at his arcade.

“I had grownups going there too. They would come to play pool and tried to beat me,” said Bova, smiling. He was a good pool player back in the day.

“The games that I had, everybody liked them, so nobody wanted me to change them. Once they got good on it, they would stay with it.”

The jukebox would be on all the time, according to Bova. He said that the girls would always play certain songs, including a French tune, ‘Lache pas la Patate,’ by Jimmy C. Newman.

“They would put a dollar in there, and they would play the same song over and over, on loop while they giggled sitting in a corner,” he said.

Another plus for the kids was the steamed hotdogs sold.

Most of the youth that frequented the arcade were good kids and Bova rarely had any issues.

“I always made sure I took the weeds out. Anybody that was too rowdy, I would put them out for a couple of days. ‘Don’t come back until you can control yourself,’” he said.

Bova really enjoyed running the arcade and has only fond memories.

“On Halloween, the place would be packed. The kids would all go meet at the arcade. They would check their bags with all the candy. They knew what kind of chocolate I liked, and they would give me some,” he said.

Bova had to eventually shut down the arcade because home computers came out, which caused a sharp decline in attendance.

“After we closed the arcade, we opened a chip stand in the garage. Jason (his son) was the cook. We had hamburgers. I made pizza. It came out really good.”

He said some people would eat there while others would take it to go. And just like the arcade, news spread through word of mouth.

“I moved on to something else. I turned it into a garage and started fixing cars. I was nine when I got my first car, so I know about cars. That is how I learned mechanics,” said Bova.

The restaurant was the hardest, according to Bova. Certain days were quiet. Nevertheless, he enjoyed cooking. “I was just happy.”

Bova was a hardworking self-starter who opened three different businesses from his garage, and he never retired.

After closing down the garage, he worked for Kanawaki Golf Club for 13 years as a mechanic.

For the love of horses and westerns