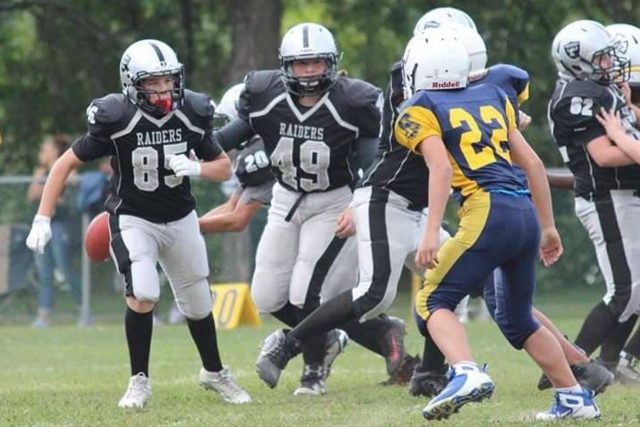 Right guard Madison-Rose Montour, 13, was voted 2019 Offensive Line MVP by her coaches for the second year in a row in the Peewee division on Sunday.

This is her fourth consecutive year winning an award from the Raiders, which include Most Improved Player, Offensive MVP and Offensive Line MVP, respectively.

The award came as a surprise to Montour when she was announced as the winner.

“I was and wasn’t expecting the award because I became a fourth-year player this year and my o-line was new,” she said. “I knew something was going to happen.”

Montour is one of three girls who are on the Peewee team, according to her father Trevor Montour. He is a coach for the Mosquito and Peewee teams.

“I didn’t expect her to play football so when I asked my son, she said she wanted to play,” said Trevor. “She was a little bit scared at first but she got better and better. Now she is one of the best.”

Her brother, Bryce Montour, 10, won Most Improved Player in the Mosquito division as an offensive lineman and defensive end. This was his first year playing on defence after spending the first three years on the offensive line. His defensive playmaking ability is what got him the award, according to his proud rakeni.

“He fit right on the o-line,” said Trevor. “He did really well as a defensive end, which got him the award, but we still had him play on the offensive line again too, because of his experience.”

This was Bryce’s first award in his four years of playing football and he did not expect to win anything either.

“I thought someone else was going to get it but I was surprised that I got it this year,” said Bryce. “I never got an award, this was my first one.”

The three consider themselves a football family. They watch NFL, CFL and NCAA football together and have all played the game at young ages. They spend several hours daily, training and practicing until game day.

Trevor admires the effort and dedication his children put into the game daily.

“I’m amazed, words cannot describe how proud I am of them and their drive to continue to get better,” said Trevor. “It brings me to tears. They’re so modest but they prove themselves on the field.”

The Raiders’ Peewee team finished the season with a 1-9 record. The Mosquito team had a more successful season, going 7-3 but lost in the semi-final playoff as the third seed.

Madison-Rose will be on hiatus from football to focus on freestyle wrestling. Bryce will continue playing football, as his father will help coach him for the next two years.