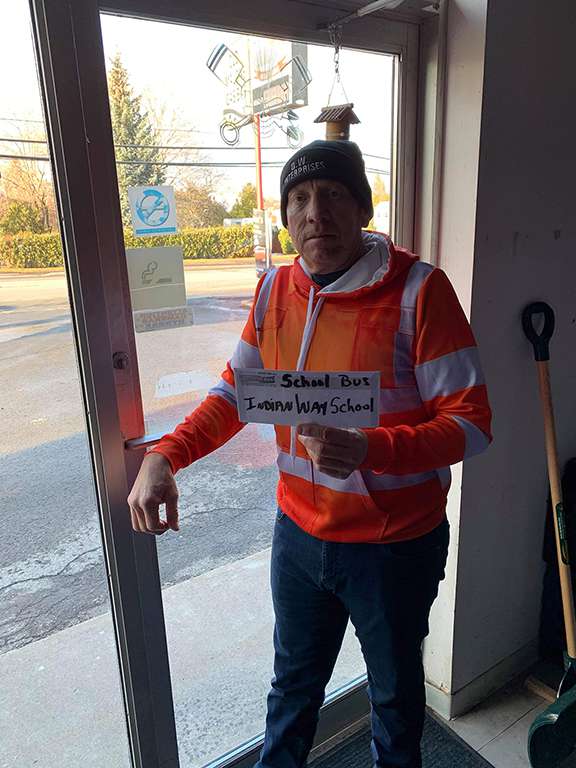 On Wednesday, Derek White pledged $25,000 to Indian Way School for a new school bus and is challenging all businesses in town to donate as well.

“They have been fundraising, and so I figured I’d kick-start the initiative and maybe get other business or other people to help out as well,” said White. “It’s for a good cause. The kids need a bus.”

In September, White hosted the second annual Ma Betty golf tournament in honour of his grandmother and donated all the proceeds to Indian Way for the new bus.

“I have three gas stations, and I own the Mohawk Market, and we have donation boxes at all the cash registers so people can give what they can,” he said.

“But we need the platinum warranty because we don’t have the funding for repairs, and we also want to get a camera system as well as seat belts and car seats for the first four seats for the younger students,” she said.

Diabo explained that last fall, the school was advised they had to purchase a new school bus.

“A bus must be retired after 12 years, and we reached that mark, but they let us keep it on for another,” she said.

So far, the school has raised a total of $36,000 since the beginning of the month.

“We have the donation containers dispersed throughout the community.”

Kahnawake Brewing Co. is doing a fundraiser for the whole month of November. For every sale of their flagship beer, “The Bridge” they will donate $1 for the new bus, according to Angelika Delormier, who works at the brewery.

Boopie McComber whose sons go to Indian Way will be hosting the “Wheels on the Bus” variety concert on January 25 at the Kahnawake Brewing Co. with 100 percent of proceeds going to the new bus.

“We have a few bands coming out to play a variety show type concert. Blood Driven is metal, the Fats are rock & roll, and Lone Wolf and the Spaghetti Corner Band are country. Plus, we have two DJs to play in between sets,” said McComber.

“Our goal is to pack the place first and foremost. But our aim usually for an independent music show at a local venue ranges from $1,500 to $2,000,” he said.

Rapids convenience store has donated $4,000 and also has a donation box.

On December 14 and 15, the Host Hotel will be hosting a craft fair to help with the fundraising efforts.

“We always like to give back to the community, so we are having a craft fair,” said Tina Rice, manager at Host Hotel. “We are selling tables and half-and-half.

“If you bring non-perishable food items, you are entered into a draw. All the proceed will be going to the Kateri Food Basket and the Indian Way School’s new school bus,” she said.

Diabo said the school is hoping to reach its goal by May 2020 as it takes three months for the bus to be constructed and delivered, and the school needs it by next fall.