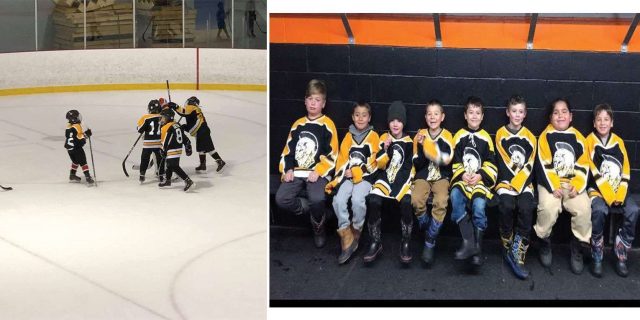 The Novice 3 Kahnawake Mohawks (left) celebrate a win. They had a +13 goal differential in two games over the weekend with two shutouts. The Novice 4 Kahnawake Mohawks (right) relax in their locker room. Warrior Jacco and Lleyton Kane scored a hat trick in their 8-0 shutout win over the Valleyfield Braves. (Courtesy Lou Ann Stacey)

In a weekend loaded with minor hockey, the Kahnawake Mohawk Novice hockey teams looked “beast,” as they came out with several wins.

The Novice 2 team coasted to a 6-2 win over the Beauharnois Patriotes on Saturday. Atiewatonni Homer netted a hat trick and an assist for four points. Greyson Jacobs, Nashtyn Mayo and Waheson Curotte each tacked on a goal apiece, with Tison Delaronde helping with two assists. Wa’kenhrawa:kon Thomas got the win in nets.

They drew to a 3-3 tie with the Mercier Braves on Sunday. Hunter Jacobs had two goals and Greyson Jacobs scored for Kahnawake. Delaronde had another assist to give him three on the weekend.

Coach Johnny Jacobs wants to make sure the kids are having fun and get equal opportunities to hit the ice.

“I give them a lot of ice time any chance I get,” he said. “It’s nice to see them smiling. Everything is good so far and the kids are enjoying the game.”

Jacobs believes that coaching eight and nine year olds in hockey should be approached differently. Instead of assigning certain positions to the kids, he allows them to explore several avenues to see what fits their style.

“They all get to play whatever position they want,” he said. “One kid can come up to me and say they’ll want to play forward and I’ll let them.

He asserts that kids at those ages will want to try different positions to see what they like. They can develop themselves in any role they feel best suited so each child can mature and grow better, according to Jacobs.

“It’s all about fun,” he said. “I have seven kids on the team, you’ve got to give them a chance.”

The coaching experience for the first year coach has been rewarding from the start.

“I love it, it’s nice,” he said. “I should have done it a long time ago. They all have a positive attitude and they’re dedicated too.”

The players spend a lot of time with each other on and off the ice, which helps develop their chemistry.

“They all know each other and they’re all going to grow up together,” he said. “They play street hockey every day. So long as they’re playing, they’re happy.”

The Novice teams are spending the first half of their season playing on half-ice before playing on a full rink early next year.

“The new format, it’s actually good,” he said. “A lot of parents were against it but all the players get double-shifts and more ice time.”

The Novice 3 Mohawks routed the Chateauguay Knights 11-0 on Saturday, with Hayse Horne getting the shutout.

They won again over the Vaudreuil Vikings 2-0 on Sunday with Horne getting his second consecutive shutout. Rohahtsa:waks Albany was the lone goal-scorer with two goals for the Mohawks.

The Novice 4 team also had a win on Saturday, an 8-0 victory over the Valleyfield Braves. Warrior Jacco and Lleyton Kane put on a clinic, scoring a hat trick apiece. Korry Goodleaf and Kylen Phillips scored a goal each with Kydon Horne helping his team with four assists.

Madden McComber got the shutout, which included a save from a penalty shot.

They lost 1-0 to the Chateauguay Monarques on Sunday. All three teams will play their next game this Sunday at the Kahnawake Sports Complex.

Novice 4 and Novice 3 will both play at 1:00 p.m. against the Chateauguay Vicomtes and Ile Perrot Riverains, respectively. Novice 2 will play the Sainte-Martine Blizzard at 2:00 p.m.

The Novice 2 team have started their season with a 2-1-1 record.