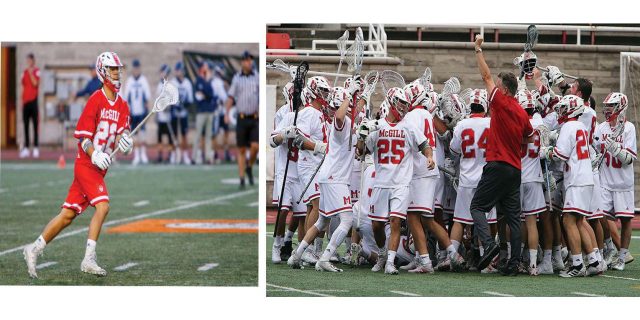 The undefeated season for McGill has come crashing down.

The McGill lacrosse team got eliminated from the Baggataway Cup in the semifinals by the eventual champion and visiting Western Mustangs, 6-5 at Percival Molson Stadium in Montreal on Saturday.

“We had an amazing first half and had some of the best lacrosse we had played,” said McGill head coach Tim Murdoch. “I think what happened was it leaves too much of a cushion and we got too comfortable.”

McGill killed off a penalty which turned into a goal from Colton Campbell up the seam to open the scoring, 1-0.

The lead was extended 95 seconds later as Kieran McKay launched a shot from the point on the run to make it 2-0 before the end of the first stanza.

The home team continued their run late into the second as Liam MacDonald scored from the top of the point to make it 3-0. He was not done yet as he scored 91 seconds later with a stutter-step to juke his defender before cutting into the slot to net his second of the game.

Western was able to stop the bleeding before the half as Keagan Croley drew in defenders off his rush and gave it to a wide-open Cody Ward who beat goaltender Michael Gallo for their first goal of the game.

The Mustangs came out strong in the second half as Cole Davis scored shorthanded with a sidearm sling from the point to make it 4-2.

The offense did not stop there for Western as they capitalized off a turnover as Julian Simeoni scored off a fast break, transitioning quickly to the offensive zone to make it 4-3, and the visiting team picked up where they left off in the fourth with Nikolai Farrus shooting back across his body from the point to tie the game.

Cody Ward of Western gave his team the first lead of the game with an underhand shot that beat Gallo through the top corner. Farrus netted an insurance goal from the point less than three minutes later to make it 6-4.

Hunter Zawada of McGill was able to halve the Western lead scoring with 55 seconds left on the clock.

With under a minute to play, the home team lost the ensuing faceoff but forced a turnover in the defensive zone. McGill went on the rush as Kerry Kane was checked during a spin move which jarred the ball loose. There was a scrum in front of Western’s net as the ball rolled past Mustangs goalie, Michael Orlando, but he trapped the ball a foot shy of the goal line to save the game-tying goal as time expired.

Western’s 6-5 win got them to the finals where they eventually became four-time defending champions, beating Trent Excalibur 8-5.

Kahnawake’s Kane and Cougar Kirby failed to register a point in the semifinals but Murdoch praised their contributions to the team.

“I know he has a child, wife and a job. It’s hard to plug him into a permanent role but we’re really proud that Cougar’s on our team,” he said. “Kerry Kane, he was a walk-on and he’s a great young man. He earned a starting job. He’s quite talented and I can see him do great things before he graduates.”

Murdoch retired as a coach following the loss as he leaves boasting two Baggataway Cup titles in his 16-year tenure with McGill, with 15 straight seasons of 10 wins or more.