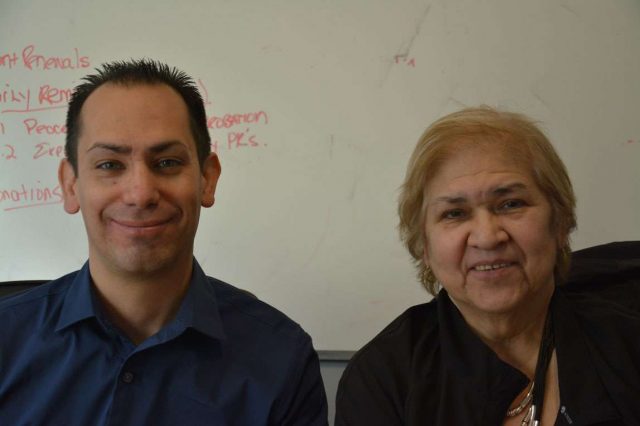 Death forces justice of the peace out of retirement

Since the Justice Act was enacted in 2015, commissioner of justice Kevin Fleischer and his team of dedicated staff at Justice Services have been working diligently to implement it and to create a justice system for the community.

“Over the years, we have expanded our staff, we have a formal mandate for Justice Services that we never had before, we restructured the Kahnawake Justice Commission, and a lot of this has been done over the past year,” said Fleischer.

Justice Services is now responsible for the development, delivery and management of the Kahnawake Justice System, according to Fleischer.

And the work is not done, as it will take a couple of more years for Fleischer and his staff to complete this mandate. “It is building for the future,” said Fleischer.

Throughout all these changes, it was business as usual for justice of the peace Stephanie Cross, that is until her fellow justice Josephine Curotte suddenly passed away in July.

“When we were appointed in 1993, Josephine and I, there were two sitting judges,” said Cross. “There was Mike Diabo and then Sam Kirby. Mike Diabo retired in 2005 and wasn’t doing any judicial duties at all.

“Then Sam retired in 2006. After that, it was only Josephine and I. We were the regular sitting judges, and we rotated during the month. After her passing, there was just me, and I couldn’t take all the cases, so we needed somebody else.”

Luckily, prior to Curotte’s passing, both justices and Fleischer had discussed the possibility of asking Kirby to come back as justice of the peace on an emergency basis in case one of the judges was unable to sit in court.

“He was reappointed by what we are calling a supernumerary basis in June,” said Fleischer.

According to Fleischer, it is similar to that of supernumerary judge who has elected to give up regular duties but who continue with a lighter workload.

“It was sort of a reappointment by council to reconfirm and return him back to the court,” he said.

Kirby had already returned to court as a back up when Curotte passed away, but afterwards agreed to come back as a regular sitting judge.

Because of his 13-year absence from performing court duties, Kirby sat with Cross for the whole month of September to get a refresher. He was on his own as of October 1.

“We hear traffic cases for traffic violations. We also handle the criminal code offences but only on summary convictions,” said Cross.

In the criminal code, summary conviction offences are less serious, like mischief, assault, obstruction, and the Kahnawake by-laws, according to Fleischer.

The justices sit in 36 court sessions per year, which are currently being held at the community room at the Kahnawake Peacekeeper station.

“What we are doing right now in the short-term is we are reaching out to former justices of the peace to see if they want to come back on a supernumerary basis. It is an interim solution. It is not something we can do forever. People are getting older and are going to want to retire,” he said.

“The long-term solution is to implement the Justice Act and have our own Kahnawake judges in place that we can name on our own.”

Fleischer explained that currently, justices of the peace go through a federal appointment made by order of council, and these appointments no longer exist.

For her part, Cross said she has no plans on retiring any time soon.