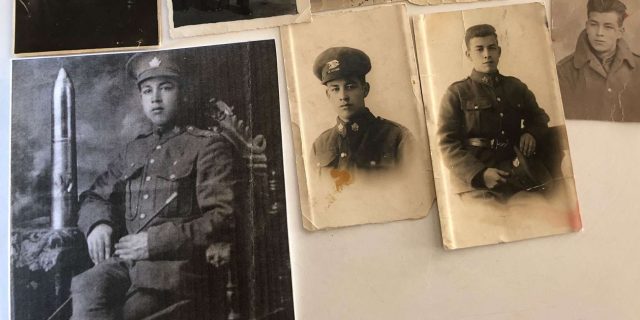 A travelling exhibition that includes the personal story of the late Angus Goodleaf will be making its last stop in Kahnawake later this month.

“I am honoured that they are doing it here in town,” said Goodleaf’s grandson Mouchie Goodleaf.

The exhibition is called After the War: Coming Home and Fitting in the End of the Great War and will be at the Royal Canadian Legion Mohawk Branch 219 from November 19 to 21.

The travelling exhibition program started in 2017 at the Canadian Centre for the Great War (CCGW).

“After The War has been travelling since January 2019 and has been in Calgary, Winnipeg, Charlottetown, Fort York, and currently it is in Montreal until November 12 for a limited opening,” said Caitlin Bailey, curator and executive director at CCGW.

“He is in the exhibition because in WWI he was the last surviving member of his battalion that fought at Vimy Ridge,” said Goodleaf.

“After he came home, he asked the government for assistance, and they told him no. They helped the white guys but not the Natives because they had an agreement with Indian Affairs, and so they got nothing.”

The exhibition showcases the struggles and problems veterans had when they returned home from serving their country.

Goodleaf was born in 1896 and enlisted on March 1, 1916, in Cayuga with the Canadian Expeditionary Force 114th battalion. He was a lance corporal.

Goodleaf was wounded at Vimy Ridge in 1917 and was discharged for being “medically unfit” on February 20, 1918, due to gunshot wounds to his knee, chest and abdomen.

“The exhibition has photographs and family interviews,” said Bailey. “We have two object cases that are going with the exhibition that have materials that were given out to veterans after the First World War. They are identifying materials, we also have some original Legion paraphernalia from the 1930s.”

According to Bailey, the exhibition has two goals. The first is to show Canadians how the First World War helped develop and change the Canadian social system.

“A lot of the things we have today like universal healthcare, veterans affairs, public vaccination even the limits around liquor license and how late bars can be open, dates from the First World War and the period after,” she said.

“The second point is to encourage people to look at how we as a society viewed and view veterans, how we took care and are taking care of our veterans and whether or not we are doing a better job.”