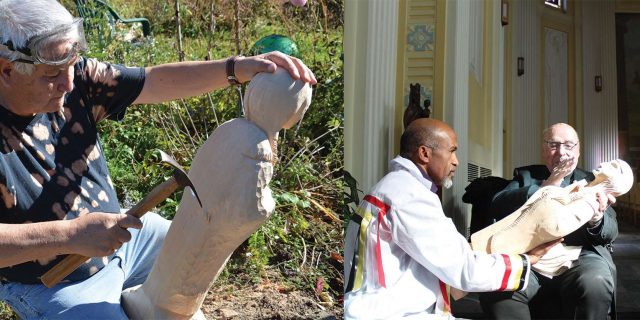 Stephen McComber has worked 55 long years at his craft, including this latest piece of commissioned art. (Steve Bonspiel, The Eastern Door)

Stephen McComber was asked to use his wood carving expertise, and he gladly created a beaut.

Although it wasn’t easy.

The task? Sculpting a rather large statue of Kateri Tekakwitha from July until this past Sunday, putting in a total of three weeks of work or so, or roughly 75 hours, with the final product put up on a pedestal in Saint-Paul University on Monday.

Making it harder to finish, his wife Winnie has been sick and in and out of the hospital.

“It’s something from our community and a very nice symbol,” said McComber. “Maybe there’s people that don’t appreciate her for whatever strange reason, but we went out to New Mexico years ago and every house has Kateri in it.”

It has been seven years already since Kateri became a saint, in a special canonization ceremony in Vatican City by Pope Benedict XVI.

“Getting the wood took awhile,” said McComber, who only received it in September.

He based his creation, which is 30 inches high, eight inches deep, and 11 inches across of basswood, on an image of another statue he found online, used for reference.

Aside from his electric sander, the work was all done by hand, including with his trusty carpenter adze, which replaced his axe and is different from what he had before, due to the advantageous angles on it.

It was in BC, so many years ago, McComber learned about negative space. “Like, on a cornbread spoon I cut out a bear’s or a wolf’s face. It’s a negative space but it becomes positive,” said McComber, 64, who taught himself 55 years ago how to carve in wood and stone, including his beloved head carvings of Jimi Hendrix, about the size of the palm of a hand, with a jackknife and a straight chisel.

Encouraged by his uncle Kenneth, he originally started making Indian villages out of bark, with burned ketchup caps and wire to accentuate, as his first experiments.

The work for this project took longer because of the attention to detail: the cross is part of Kateri, not added later; the shawl, which emulates leather and is more traditional and appropriate for the time, has depth to it; her hair is braided and quite prominent in the front.

McComber uses much smaller tools for delicate pieces like that.

Getting the wood smooth, referred to as chipping, is also tough, and very different from stone, he said, which he also likes carving.

Sebastian Pilon, Indigenous Initiatives coordinator from Saint-Paul University, was kind of like that guy who carries the Stanley Cup earlier this week. He left Ottawa in the wee and came to get it, sans stains because McComber simply ran out of time.

On Monday, Kateri was blessed by an Ojibway priest with sage and placed on a pedestal in the chapel at Saint-Paul University next to a carving donated by an old Oblate priest in the 1930s, carved by an artist from France, called The Black Virgin, which is related to the stain used, not ethnicity.

Pilon’s position was created by the university’s rector, Chantal Beauvais, who was really affected by the Truth and Reconciliation Commission’s 94 recommendations, and she “wanted to act on that truth,” he said.

“Never before had they contemplated this.”

So they created his position and he reached out to the neighbouring Algonquin communities “to move along with good faith, in a good way.”

When Pilon called the Cultural Center months ago, he said it took about 1/15th of a second to suggest McComber.

“I was up to the challenge and honoured,” said McComber.