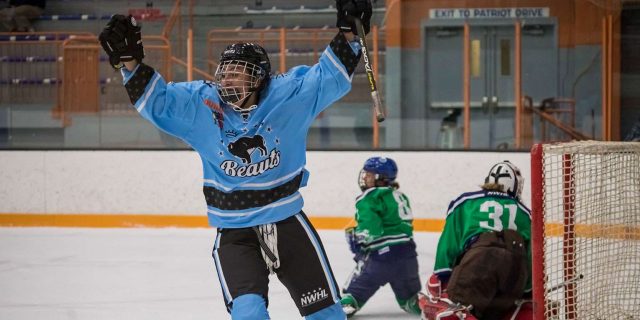 Brooke Stacey has never intentionally sought out the spotlight. “I’m pretty shy and always have been,” she said.

In her debut with the Buffalo Beauts last Saturday in the National Women’s Hockey League (NWHL), Stacey got off to a slow start in the early going.

“It was a tough first two periods for me. I wasn’t performing my best. But I started getting more comfortable just with my team and my linemates.”

But with the game tied 1-1 late in the third period, Stacey was sprung on a breakaway. One that began at centre ice. “I knew I had to score because there were three minutes left,” Stacey thought to herself. “And I said ‘come on just find that net,’ and it did. It was pretty exciting to get that under my belt.

“I knew I was not going to deke out the goalie, because that’s not what I do. I knew I was going to shoot,” she said. It was a breakaway in which Stacey had an eternity to think about what she would do once she reached the goalie.

Her mother, Tina McComber was watching the game on her phone at home.

“I started yelling,” McComber said. “Savanah (her youngest) was in her bedroom. And I yelled “Savanah, Bebs scored!”

That goal wasn’t the only game winner McComber had to celebrate from her offspring on Saturday. At around the same time her son Dylan helped the Cornwall Senior ‘A’ Prowlers to an 8-7 win in Maxville over the Millionaires.

Brooke found out right after the game.

“That was pretty cool,” Stacey said. She congratulated her brother on the family Facebook chat group afterwards.

Despite being almost seven hours by car from home, Stacey is not very far from family this time around. When she played in Sweden in the spring, she had no friends or family to count on for more than six weeks and things got lonely.

“The team in Linkoping was already established and I joined them late in the season,” Stacey said. “The girls were nice but I was sort of the outsider.”

But now she is with family.

“She’s staying in Tuscarora,” McComber said. “She’s staying with my cousin Tracey McComber and her husband Emmitt. It’s a lot easier for her being there.”

Brooke has a ton of down time in her new job. The Beauts practice twice a week, Wednesday night and again Friday, often ahead of a pair of weekend games.

She has begun babysitting twice a week. “I love kids, so it’s an easy gig for me.”

That part may be easy, but Stacey is facing the challenge of playing a new position so far with Buffalo. She played centre for most of her career, including throughout college at the University of Maine, and last winter playing professionally in Sweden.

With one game-winning goal in her first game, the adjustment seems to coming along quite well.

Stacey and the Beauts have a pair of games this Saturday and Sunday in Boston against the Pride.