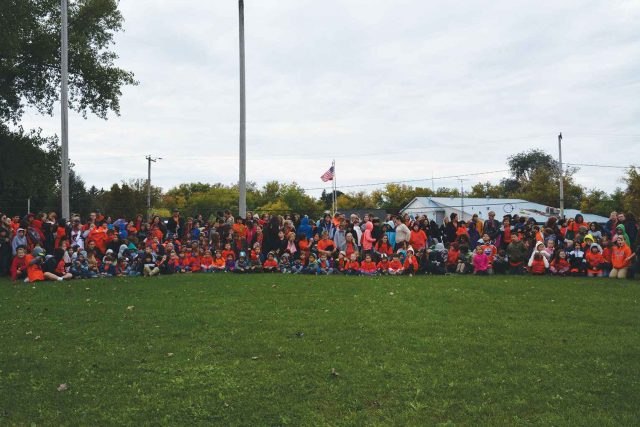 Many Kanien’kehá:ka came out to commemorate and bring awareness to residential school survivors on Monday for the fifth annual Orange Shirt Day, vowing never to let it happen again.

It was a chilly fall morning at the green space next to the Orville Memorial Park, but little by little community members started to trickle in as the fire burned.

Randy Cross, the firekeeper, was starting the tobacco burning ceremony as the school children began to arrive.

Then the crowd formed a human circle, and the colour orange could be seen everywhere.

Elder Joe McGregor said a prayer for survivors and their families, but also for those who are no longer with us as people stood and watched in silence.

“They took our language and our ways,” said elder Joe Jacobs, who was the first to speak at the gathering. “We need to get our language back for the children that are sitting here. I’ve got children, too, and grandchildren, and I hope this doesn’t happen again… We have a few of them (survivors) standing here today, and we must never forget them.”

Don Barnaby sang a song as he has for the past four years at the annual gathering.

“I moved here five years ago. I came and asked them (the organizers) if I could sing a song to the survivors, the elders that were here because my mother and my auntie are survivors,” said Barnaby.

“I waited until all the children were gone, and it was something that I wanted to do privately for them. So I sang a song for them… my honour song. I got a message the next year asking if I would come back and sing it for everybody, and I was just so honoured because as a generational survivor, a trauma survivor, it is important…” he said.

Barnaby said coming to Orange Shirt Day helps him with his healing. He said that trauma affects Indigenous peoples for generations, especially for family members of those who never made it home.

“They can’t be forgotten. They left behind family members too. So I want to honour them in any way that I can. This is just a small part to be able to come here today. This is something that I think about all the time when I see my mom, who talks about things, but she doesn’t,” said Barnaby.

Organizer Helen Montour said it is essential that Indigenous communities never forget what happened to their families and survivors continue to be supported.

“We need to keep turning a negative into a positive thing. So we should never forget and every child matters,” she said.

The importance of Orange Shirt Day is further highlighted by a situation over at St. Willibrord elementary school in Chateauguay, which has a large number of students from Kahnawake and other Indigenous communities.

September 30 was picture day at St. Willibrord, and on Sunday evening, parents received a reminder, which included a brief note about Orange Shirt Day taking place on October 2.

“There was no mention of Orange Shirt Day prior to this day coming up,” said Chandra Labelle, mother of a sixth grader who attends the school and belongs to the Inuk community. “It was school picture day on September 30.

“The two could have coincided,” she said. “The big point was not acknowledging that it was Orange Shirt Day elsewhere. It was the casual dismissal.”

According to Labelle, many parents were angered by the school’s handling of the situation and voiced their disapproval on social media.

“I shared the insult and the hurt I felt in the casualness of moving Orange Shirt Day from September 30th to October 2nd at St Willibrord School in Chateauguay,” wrote Labelle on Facebook on October 1.

“I told them of how reconciliation should be an every day effort on the behalf of the non-Indigenous decision makers, how easily ideas could be reflected with the community resources down the road should their efforts be sincere. I asked that more thought go into the scheduling of and the wording around days of Indigenous recognition,” the post read.

On Wednesday, the school held an Orange Shirt Day assembly led by Tom Dearhouse who is a traditional support councillor at Kahnawake Shakotiia’takehnhas Community Services (KSCS) and a committee member of the newly-formed residential school healing ministry.