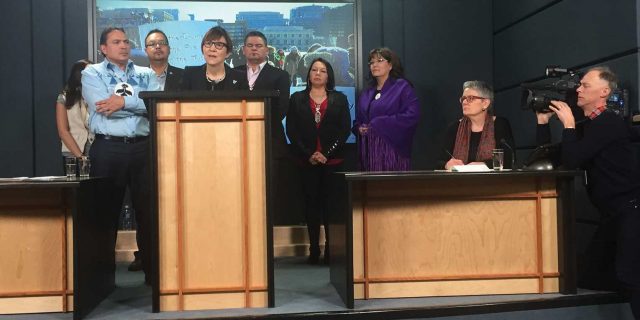 Cindy Blackstock (podium) has been fighting hard for the rights and equal treatment of on-reserve children. (File Photo)

In a decision announced last Friday, the Canadian Human Rights Tribunal (CHRT) ordered the federal government to compensate $40,000 to each First Nation child wrongly taken from their homes and put in care of the state with no proper funding and services.

The case against the federal government started with the Tribunal in 2007 by the First Nations Child and Family Caring Society of Canada (FNCFCS) and Assembly of First Nations (AFN).

According to the 93-page ruling, signed by the tribunal members Sophie Marchildon and Edward P. Lustig, the panel finds there is enough evidence to establish, on a balance of probabilities, the government’s racial discrimination found in the tribunal’s decision; and as a result, the CHRT ordered Canada to pay the maximum amount allowable under the Canadian Human Rights Act (CHRA) for “First Nations children, youth and families who have been harmed by the child welfare system or were denied or delayed receipt of services due to Canada’s discriminatory imple mentation of Jordan’s Principle.”

Jordan’s Principle is a rule in response to the death of a five-year-old child Jordan River Anderson, from Norway House Cree Nation in Manitoba, who suffered from a muscular disorder, treated in a Winnipeg hospital, while the federal and provincial governments could not resolve the financial issue for necessary home care. Jordan never had a chance to live in a family home and died.

The purpose of the CHRA is to give effect to the principle that “all individuals should have an opportunity equal with other individuals to make for themselves the lives that they are able and wish to have and to have their needs accommodated, consistent with their duties and obligations as members of society, without being hindered in or prevented from doing so by discriminatory practices….” section two of the CHRA reads.

Cindy Blackstock, member of the Gitxsan First Nation and executive director of FNCFCS, testified in the tribunal hearing and fought for years for the children.

“This is linked to the 2006 findings by the tribunal that Canada was just discriminating against First Nations children in the prevision of welfare funding, and also they (Canada) failed to implement Jordan’s principle,” Blackstock told The Eastern Door.

“It means that the government knew about the discrimination,” she said, “(The government) knew and was creating harm for children and families and showed nothing to do something about it. “In this decision the tribunal finds Canada did willful and reckless discrimination against each child and what the tribunal calls a ‘worst-case scenario,’” she added.

Blackstock said under the CHRA, victims of discrimination are those who did not apply or were denied a federal public service (assessment, respite, learning assistance, mental health therapy) or certain equipment (wheelchair, orthodontics, learning device etc.); and they are entitled to two different financial awards: first is $20,000 per victim of discrimination and the second one “is reserved as the most grieviest cases and that is an amount of $20,000 per victim if the discrimination was ‘willful and reckless.’”

Blackstock spoke about several categories of victims, saying only the number of the children in care is roughly 55,000 children between 0-18 years of age within two different time frames: children on basic principle portion – January 1, 2006 until present day – and Jordan’s Principle section – December 12, 2007 until November 2, 2017.

Most children living on reserve or in the Yukon who were federally funded for children family services between 2006 and today are eligible for $40,000 of compensation, the maximum allowed under the Act, she explained.

Spokesperson for Indigenous Services Canada (ISC) Martine Stevens said the ISC office would need time to review the tribunal’s order, however, “our approach in general has been to resolve as many issues as possible through discussions with the parties to the CHRT complaint.”

“Strong progress has been made and our intent is to continue,” she said.

An Act respecting First Nations, Inuit and Metis children, youth and families, announced by ISC Minister Seamus O’Regan this Tuesday, will come into force in its entirety on January 1, 2020.

The tribunal also decided the parents or grandparents of families, where a child was unnecessarily removed and placed in child welfare care due to poverty, parental addictions and mental health issues, are also entitled to $40,000, however, parents or grandparents responsible for sexual, physical or psychological abuse are excluded; they are not eligible for compensation, Blackstock said.

A second group of compensation, related to Jordan’s Principle, means families with kids with special needs or children who needed high level care without stay in their family homes and with no special care provided, are also entitled to the maximum amount of $40,000, as well as children or families of children who marginalized services because Canada had a discriminative approach to Jordan’s Principle, according to Blackstock.

“I think we are talking about multiple billions of dollars,” she said.

She underlined it is a legal order: “Canada has either to appeal it or implement it.”

Canada has 30 days after the tribunal’s ruling, until October 7, 2019, to appeal this decision, Blackstock said.

“Even if they file an appeal,” she said, “That doesn’t mean that decision doesn’t have to be implemented: in order to get out of that, the federal government would have to apply to federal court for a second legal order, that basically means they’ll put the decision by the tribunal on hold until the appeal is heard.”

According to the tribunal ruling, Canada needs to establish the process for compensation.

“We will make suggestions before December 10, but it is up to Canada how to distribute the money, we won’t be submitting the money, Canada will be doing that work,” she added.

This ruling makes clear that the work of government needs to be reformed, and in order to end inequalities in public services for First Nations children, “we are also calling on the government to implement the Spirit Bear plan,” which is a list of recommendations to all administrative institutions to be involved for First Nations children having access to proper education and health care, safe drinking water, and other public services, Blackstock said.

“The First Nations leadership can negotiate with Canada on comprehensive mandate,” she said, “Because unless the Spirit Bear plan has been implemented, I think we are going to see another generation that is going to be wrongly-treated by Canada and hardships that cannot be prevented.”

“It is not enough to say it (government) supports reconciliation while you are perpetuating reckless discrimination,” she said, “There is something about culture and human rights.”

Blackstock said the process of notifying the victims is another important part of this work.

National Chief of the Assembly of First Nations Perry Bellegarde expressed his appreciation about Blackstock’s work on his Twitter page last Friday saying, “no government should be fighting these fundamental values.”

“This is about our children, their safety, their right to be with their families, kin and communities and their right to quality of care,” he added in his tweet.