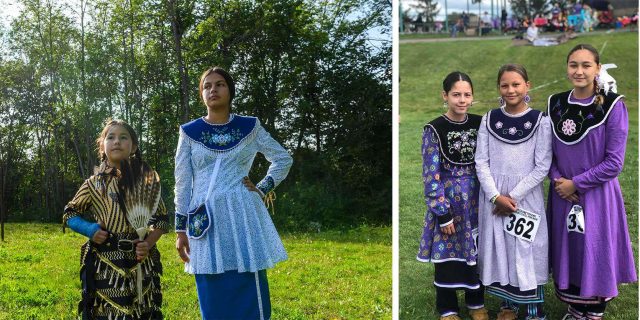 A trio of local girls impressed in Akwesasne last weekend, taking home two seconds and a third while strutting their stuff for all to see. (Courtesy AndreJIPhotography and Caralee Montour)

Ie’nahkwenhá:wi Rice wasn’t going to let a little thing like a broken arm stop her from dancing.

Luckily for her competition in the 6-12 Jingle, otherwise she might have finished on top at the Akwesasne International Powwow last weekend.

Broken wing or not, Rice was impressive.

“A broken arm won’t stop me from dancing because I love it,” said the spunky nine-year-old.

“The first day she had to take children’s Advil for the pain after her competition but the second day she was fine,” said her mother Tina Stacey. “She competed with 18 other little girls, used her opposite hand for her fan to hit her honour beats and took an amazing second place with a smile.”

She had asked “‘Mama can I still dance? I don’t fall when I dance!’”

Can’t argue with that logic.

And dance she did.

“They were having a b-day special for a little girl at the powwow,” said Stacey. “My little one practiced with her older sister all week for that special so I don’t think anything was going to hold her back from dancing this weekend, not even a broken arm,” she laughed.

The diminutive Rice was pushed playing soccer at school, and suffered a broken radius in her right arm.

For her part, her glowing ista said she felt “f-ing amazing and proud,” and the tough part, she confided, will be to keep her little daughter off the ice for hockey season with the Westlake Atom A girls, to better heal her wound.

“She has a drive in her to do her absolute best,” said Stacey. “It seems nothing will stop her from doing not only what she’s good at but what she loves to do!”

Iakorennaientatie Kayleigh Alfred, 12, just started powwow dancing at competitions this year and is off to a hot start.

“She did amazing at her first powwow at home in Kahnawake but didn’t place, which was totally okay with her, she didn’t get discouraged,” said her beaming mom.

“Then she went to the Lyle Anderson smoke competition at the end of August and didn’t place in her category but got 1st place in the switch up dance. I cried watching her video because she’s just so amazing and light on her feet.

“Also, because I always wanted to dance at the powwow but never had the courage… and here’s my baby, she’s doing it and killing it! She makes me proud to say ‘that’s my daughter.’”

With wind in her sails, Alfred headed to Akwesasne’s A’nowara’ko:wa Arena to test her burgeoning skills against some hefty competition in the smoke dance, age 6-12.

To her surprise, she danced her butt off and came home with second place.

“I was very happy and thankful,” said the dancer of few words.

Her mom wasn’t holding back her joy, however.

“We couldn’t be more proud of her,” she said. “That’s all she does, everywhere she goes. Whether at home, in the car, in her room, or in the shower, she has her smoke dance songs booming and her toes tapping.

In only her second powwow (the first was in town), Montour finished right behind Alfred in third in the smoke dance 6-12 category.

“I felt surprised and happy because I didn’t know I was gonna place,” said the tween, who just turned 12 in the summer.

“I feel extremely proud! She just got into dancing a few months ago, it came out of nowhere but she was determined and practiced in her room and in the yard,” said her mom.