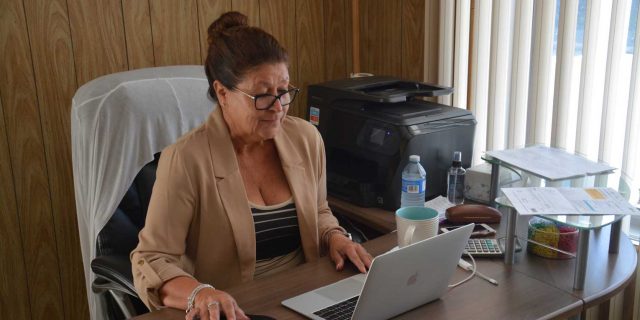 Arlene Diabo is set up in her new office on the River Road to answer questions from community members regarding the proposed casino, hotel and water park. (Steve Bonspiel, The Eastern Door)

The issue of a local casino/water park/hotel is not dead, say proponents, and they sat down with The Eastern Door this week to discuss their plans, including a new office to provide information, but to also seek guidance from the community.

A working group was formed in 2018 of proponents and the Mohawk Council to explore the idea of a land-based casino, but that fizzled, especially after the Kahnawake Mohawk Entertainment Resort group wouldn’t sign a non-disclosure agreement for various reasons, including section 2.6 that states the MCK could, after a year and if it so chose, use any of the information gathered for a potential future project.

“I said no, I’m not signing that,” said KMER group member Debbie Delisle. “I’m working for the community. I’m not getting paid, I was volunteering because of my principles.”

But it went beyond the NDA.

“There were many unanswered questions about the project and I thought it would be good to flush out some of these things with them,” said Mohawk Council chief Gina Deer.

Eventually, it just didn’t work out and the MCK said “at this time” they could not move forward and support the project.

“The casino group didn’t want to spend any money on studies or things like that,” said Deer. “It felt like they were premature in the planning so how do we move forward when there are so many questions?”

Add to that other issues like the proper reconfiguration of the highway, adequate water supply for the water park, and policing services, and there were more questions than answers.

A petition of 1,034 signatures was submitted to the MCK, but many called Deer and other chiefs to say they wanted their names off the petition, after being unclear on what they signed.

After it went through membership, about 100 names were deemed ineligible on the petition.

But things have changed, said Delisle and Arlene Diabo.

In the new possibility of this project coming to fruition, 100 percent of the proceeds would go to the community, instead of the 80-20 split previously heralded.

So where does that leave Lee Thompson, who was said to be majority owner previously?

That remains to be seen, they said, but the community would have input.

“That’s why we need the community to work with us to develop a board of trustees,” said Diabo.

In three to four months a feasibility study “should be completed,” said Diabo, and “the community will be welcome to take a look at it.”

The two ladies were asked where the money was coming from.

“It may come from the private sector in the community. But for me it’s going to be transparent, we’re going to know who they are,” said Delisle.

But in the earlier version of the project, they said they had no concrete investor.

“Because council didn’t support it, any investor we met with needed something from council saying they supported this venture and were willing to sit down and talk. But council wasn’t willing to do that,” said Diabo.

“We understand they want a casino, but we don’t know how they plan on doing that,” said Deer. “What kind of support they have now, I don’t know, but it’s a dead issue for a lot of people.”