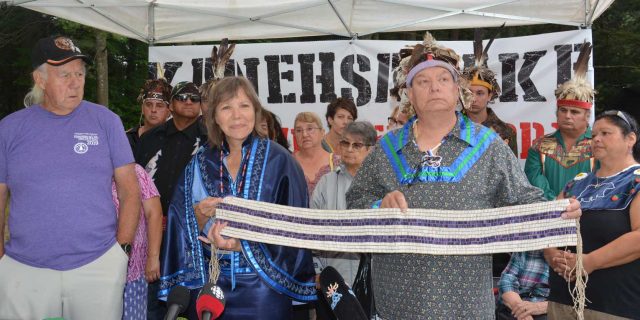 On behalf of the People of the Longhouse in Kanehsatake, Ellen Gabriel demanded that the federal government resolve once and for all the generations-long land dispute. (Marisela Amador, The Eastern Door)

During a news conference on Wednesday afternoon (August 21), the People of the Longhouse in Kanehsatake demanded that prime minister Justin Trudeau stop all acts of land fraud and illegal development.

“We are once again obliged to demand that Canada cease and desist its fraudulent sale of our Kanien’kehá:ka homeland,” said activist Ellen Gabriel.

The press conference took place outside, in the Pines, the piece of land at the heart of the 1990 Oka Crisis.

Before the demands were read, David Gabriel, who is part of the Longhouse in Kanehsatake, said that the purpose of the press conference was to spread the word and to move things forward finally.

“We demand a cessation and moratorium on all developments, to the ongoing collusion of the land fraud between Canada, Quebec with the inclusion of the Seminary of Saint Sulpice. These illegal acts of land dispossession are founded in racist legal fictions,” said Ellen.

According to the Longhouse, along with Kanehsatake, Kanien’kehá:ka land also includes the municipalities of Oka, Point-aux-Anglais, Pointe-Calumet, St. Joseph, Sainte-Marthe and Deux Montagnes and many others.

Negotiations for the land claim are ongoing between the federal government and the Mohawk Council of Kanesatake (MCK). The Longhouse, which is the traditional governing body in Kanehsatake, is not formally involved.

“The impact of Canada’s colonial laws persist causing the suppression and violation of the Kanien’kehá:ka Nation’s inherent rights to its sovereignty; this includes our socio-economic rights, cultural and language rights and health and land rights,” she said.

“We caution the companies like that of Les Collines d’Oka of Mr. Gregoire Gollin, and Des Domaines des Ostryers and other developments from the sale or transfer of anymore disputed lands in Kanehsatake.”

Aside from the moratorium on land development the list of demands also included: the cessation of all archaeological digs in the Parc national d’Oka, the immediate cessation of Bill S-24 (the Kanesatake Interim Land Management Act), restitution and reparations from Canada, Seminary of St. Sulpice and Quebec.

As to the proposed ecological gift and land transfer from Gollin, Ellen Gabriel said, “We respect his intent, but since this too requires a release or extinguishment of our land rights and is subject to the federal laws under the Minister of the environment, we cannot accept the colonial terms and conditions of Mr. Gollin’s intent.”

The ecological gift caused a media frenzy in recent months and escalated with a war of words between Simon and the mayor of Oka, Pascal Quevillon. The two men are currently not on speaking terms.

When asked why MCK grand chief Serge Simon wasn’t present, Ellen said that the news conference was called by the Longhouse and not MCK and she refused to answer any questions not related to the land fraud.

The Longhouse is giving Canada 10 days to respond before they begin peaceful pressure tactics.

Ever since 1990, the federal government has had an opportunity to resolve some of these issues, Deom said, and nothing has happened, and it is time for something to finally be done.