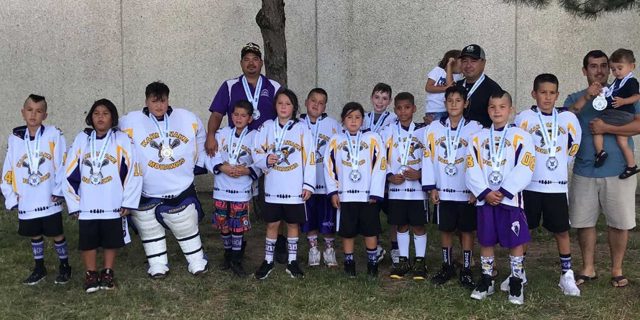 The Ontario Lacrosse Festival had some good competition in this year’s Midget and Novice categories, giving the Kahnawake Mohawks a tough time placing in the top teams, but that didn’t stop them from playing to their hearts’ content.

This year was the Padelfords’ first year playing the Kahnawake Mohawks, and they would do it again if they could, said father Eric.

“It was the first championship that we’ve been with the Mohawks and it was just great,” said mother Megan. “My boys loved it.”

The Padelford squad has all three of their sons playing for the Kahnawake Mohawks, where their youngest Rylan was a part of the Bantam crew, who didn’t make the cut for playoffs in Oshawa, Ontario.

Sawyer joined in on the Novice team, who had a close fight in the final and came out with silver shinning on their necks.

In game one, they swept West Grey with an 11-1 score and set their standards high for the series.

Game two was another box clearing of 15-4 against New Tecumseh, setting them up for their final match of their seed with the Akwesasne Storm in game three and another 8-5 win for the Mohawks.

Going strong into quarters and semis, the unfortunate Milton and Halton Hill squads were the next opponents to play against the unstoppable Mohawks, falling to Kahnawake 5-3 and 8-2.

Then came the final game, where the intensity kept the lacrosse fans on the edge of their seats and ended with the underdogs losing to Oshawa 5-3, ending Kahnawake’s run at gold short.

“It was a really great run!” said Megan. “The boys became so close and really loved each other.”

Caden, the Midget’s left winger, and his fellow lefties Teharonhiorens McComber and Trey Deere, are a force to be reckoned with.

“Between Caden, Teharonhiorens and Trey. We call them our three-star lefties. They just have so much rhythm and the whole team just has such a great flow to them,” said Megan.

For a majority of the lacrosse lads, it was their final run for gold in minor lacrosse.

“For a lot of the boys it was their last Midget game, so it was a little bit of a sad ending,” said Megan. “They had to beat a lot of good teams to get to where they were, so we’re really proud of them.”

This year was Caden’s first and final year with the Kahnawake Mohawks and he’s proud to have fought with them.

“It was pretty awesome, I loved playing with the guys,” he said. He hopes to play for the Junior B Hunters next season, but is unsure of where he will take his game to next, he said.

Midget coach Garrett Cree was happy with the team’s performance and is excited to see what comes of the players.

“It’s a tough sport,” he said. “Its hard to compete at a high level if you haven’t been playing very long, and they managed it.”

A part of the team had only picked up a lacrosse stick this year and Cree was happy to see they became strong lacrosse players by the time they reached playoffs, he said.

“Everyone was very welcoming,” said Eric. “They had a lot of success and it was a great experience for my boys.”