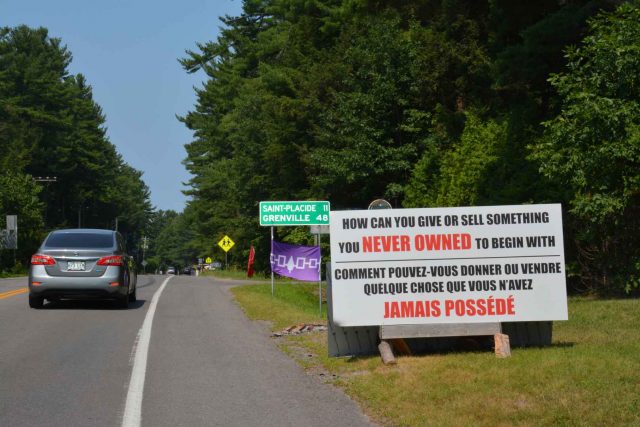 The war of words continued last Friday (August 2) between Mohawk Council of Kanesatake grand chief Serge Otsi Simon and the mayor of Oka Pascal Quevillon over a land dispute that has grown increasingly contentious.

Quevillon refused, yet again, to publically apologize for his derogatory remarks about the community of Kanesatake, which prompted Simon and his council to cut all communications with the mayor.

“My council and I decided that we were not going to give this mayor any more importance than he is looking for,” said Simon, after the first meeting was over last Friday (July 26).

The second meeting was between Quevillon and both government representatives. An MCK press release issued late Thursday evening (July 25) said that Simon would join the second meeting if the mayor would apologize.

“He made it clear this morning that he was not going to apologize for what he conceives as the truth about my community. My community has several social problems, yes, and what he is describing there is not the will of my council to propagate those social problems but the lack of fiduciary responsibility from the federal government,” said Simon.

No new meetings are scheduled to take place, and Simon said because of this impasse with Quevillon, they are now back to square one.

However, the sit down with the Crown and Quebec was much more positive, according to Simon, as pressing issues related to jurisdiction and responsibility were discussed.

“We talked about various responsibilities. We have to start looking at levels of jurisdiction, where Ottawa is responsible and where the provincial responsibility lies,” he said.

Economic development, as well as the potential funding and set up for a communications system in Kanesatake, were also part of the talks.

The proposed “ecological gift” from developer Gregoire Gollin is behind this new land dispute. No new developments have occurred on that front as council is still waiting on Environment and Climate Change Canada to decide on Kanesatake’s eligibility as a recipient under their rules and regulations.

“Because we are First Nations, this ecological gift may not fall under the same terms. We may have to get a little bit creative,” said Simon.

On Monday (July 29) MCK released an open letter to Quebecers, making it clear that an “Oka Crisis 2.0” was not happening.

“The letter aims to clearly express that there is no question right now of a second Oka Crisis. The situation has changed. Certain measures were taken since 1990 in order to take things further,”the letter reads.

“Even though much remains unaccomplished, and that the federal government needs to assume its fiduciary duty, the Grand Chief insists on the fact that the Kanesatake Mohawks wish to live in peace.”

The grand chief told The Eastern Door that he wanted to clear up all misconceptions regarding the potential land transfer and calm the panic that was caused by Quevillon’s “half-truths and outright lies.”

“We let the people know what happened in Kanesatake and its history. It is also to put Quevillon on notice that we are not going to take his lies at face value anymore,” he said.