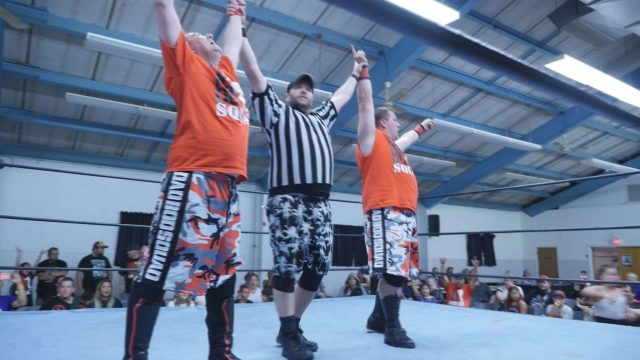 The Dad Bod Squad got a bump from the hometown crowd at the Knights are have all four eyes on the tag-team title. That means, however, they might need to train… maybe. (courtesy Inter Species Wrestling)

Familiar classic rock tunes emanated from the Knights of Columbus on Saturday, as a crowd of all ages lined up eagerly to attend “Cruel Summer” hosted by Inter Species Wrestling.

The spectators rolled in to take their seats, while many kids bugged their parents to get them something from the variety of wrestling figures, belts, and masks laid out on tables that stretched across each side of the room.

All were restless with enthusiasm until the bell quieted the room, marking the start of the action. The announcer first introduced Chili Kid, who ran out in his bright red mask and his opponent Werewolf of Wallstreet, who took to the ring howling in his wolf mask.

“Inter Species” is an accurate term to describe what this company is all about.

“We have a cast of wacky characters that entertain and appeal to both children and adults,” said Michael Woods, creator of Inter Species Wrestling and the one who promoted this event.

“We don’t put on the traditional wrestling event. We think outside of the box, and put on an event that involves wrestling, comedy, and other entertaining elements that is unlike anything you’ll see at another group’s shows”

The Dad Bod Squad, Kyle Zachary and Shawn Rice, made their heroic return to the ring to the ruckus applause of the hometown crowd, as they squared off against #theBest.

“The show went really well,” said Zachary. “We got a huge pop from the crowd, we sold a bunch of merchandise, and I think we line ourselves up as a contender for the tag team championship, which is also concerning because the two teams that were in the championship match were incredible.”

If the Dad Bods get the nod, it’ll be time to hit the weights, Zachary admitted.

“If we’re in the mix with these guys, we definitely have to at least try to train,” he said. “When I said, ‘try to train,’ I meant it in the way people say they’re going to the gym more on New Year’s Day. Everyone knows that’s not going to happen.”

It was the squad’s fourth ISW appearance.

“The company is very unique in that it’s wrestling for people who don’t like wrestling,” said Zachary. “There’s a special vibe that comes with these shows. There’s something for everyone.”

Anyone that has seen this show can agree. As Woods said, the organizers of the Inter Species Wrestling events actively try to be inclusive of all ages by combining a variety of different entertainment mediums.

The second match was between Billy Brash and Chance Rizer. Just as the contenders entered the ring, they began performing a comedy sketch. Rizer stood in his corner, only focusing on his phone and ignoring the riled up Brash. Brash grew angrier as Rizer tried to take the perfect selfie. The sketch was comedic and was a creative way to lead up to the fight.

“Every show has comedy, technical wrestling, hard-hitting, quick-paced action, and every once in a while, a bit of the extreme stuff,” said Zachary. “It differs from a lot of other companies that will take themselves too seriously or have wrestlers on it that only care about their spot.”

During half-time a character named the Turtle ran on stage and was followed by some other creatures that gave out pizza to everyone. Kids swarmed him immediately to get their share.

It was evident that many of the fans knew each other yet Becky, wife of Woods, states that “there are a lot of regular fans, but we also have people that come from everywhere; Montreal, Ottawa, and the US.”

The event was as much about the show as it was about bringing people together through creative entertainment.