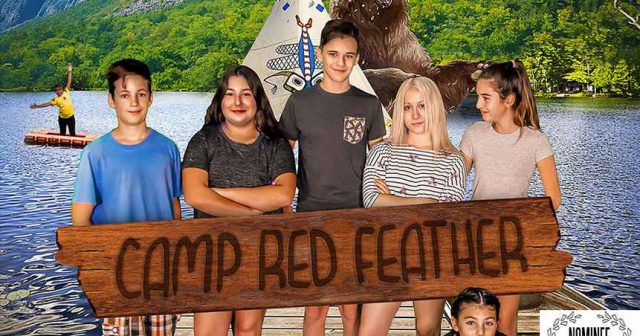 Filming completed on It Takes Time in February, and the final product is making the festival circuit. Producers say cheques are in the mail for the talent who worked on the film, but some remain frustrated at how long it’s taken to get paid. (Courtesy Seneca Films)

Marissa Leblanc was frustrated that she and her daughter Adysson Stacey had not been fully paid for acting work they did last year on It Takes Time, a Seneca Films project that has begun touring the film festival circuit.

Leblanc videoed herself confronting Seneca Films owner Peter “Boy” Rice last week at his home, asking why he hasn’t paid them for work they did last year.

“If it was just me, and I went on set – I think I was there three or four days – and this happened, I don’t even think I would have pursued it,” said Leblanc. “It wouldn’t have been that big of a deal. It was a good experience. That’s just me, but now you’re screwing over our kids, and they all had their hopes up.”

Rice told The Eastern Door this week that talent involved with the project will be paid within the coming weeks.

“Money is coming out of my pocket to get this done,” he said. “We’re not trying to screw anybody.”

Rice said 25 cheques went out Tuesday, and more went out yesterday, and that a disagreement with his private sector partner from New York resulted in the partner holding back money meant to pay the actors.

“When he saw the film (he said) the people that did the filming screwed everything up,” said Rice.

Rice said he went south of the border, sued the partner, and that his partner has been releasing money every couple of weeks.

Rice said his partner complained of continuity errors, issues with colour, and other problems with the production, as his reason for withholding funds. Rice said he had every intent on paying everyone involved in the film.

“We’re not trying to hide any money, but what they did is they took all the money because they said they didn’t like the movie because it wasn’t done properly,” he said. “We didn’t know that.”

Timothy said he worked for around two weeks and figures he’s owed about $800 at $15 per hour for shooting on the non-union project.

“I wanted my kids to have experience and see what it was like (on set),” said Timothy, who has appeared on screen many times, including locally in Mohawk Girls and other shoots.

“That’s what’s so heart breaking. So many kids gave up their summer last year for this production,” said Timothy. “There was no reward at the end of it. What was the lesson they got out of this? That they don’t have to keep their word?”

Having worked in different productions in the past, Timothy knows sometimes money dries up on independent shoots, and cheques take a while to come. However, he was frustrated at the producers’ inability to give a straight answer as to when the actors would be paid.

“There’s a saying in the business: you pay your talent,” said Timothy. “He kept on changing what he considered the end of filming.”

“It’s an awful lesson for the kids,” said Leblanc. “The contract states the moment the filming is concluded is when the payments are going to go out… Don’t screw over kids.”

The filming ran from early July 2018 to February of this year, and Rice and his staff is certain every actor has or will be paid.

“Every child has been paid, has gotten something,” said director Stephane Ouellet. “Is it half? Is it a third? There were 32 kids plus adults, plus extras.

Timothy said he was willing to give the production the benefit of the doubt, but is left frustrated not being certain what exactly is going on.

“The worst part is the lack of communication,” he said. “Nothing worse than trying to contact someone and it’s just dead; total silence.”

The Eastern Door contacted five other parents of actors who appeared in the film this week. Two out of the five had been partially paid for their work.

“We all had a good time on set,” said Leblanc. “That’s just the disappointing part: that they didn’t get paid.”

Rice said cheques began going out in early April, and that his intent going into the production was to give local young people a chance to experience being on a real film set.

“We were trying to teach them as much as we can because I’ve got about five other movies coming out, and we wanted to do a lot here on the reserve, so these kids could wind up doing something,” said Rice.

Rice said he is in pre-production for an ambitions $700 million film How North America Saved the World, which he hopes to fund using public funding as much as possible.

He said the cost overruns, re-shoots and other issues on It Takes Time caused the production to go around $65,000 over budget, but that by August all actors will be paid.

“Probably the following week, everything will be done,” said Rice.