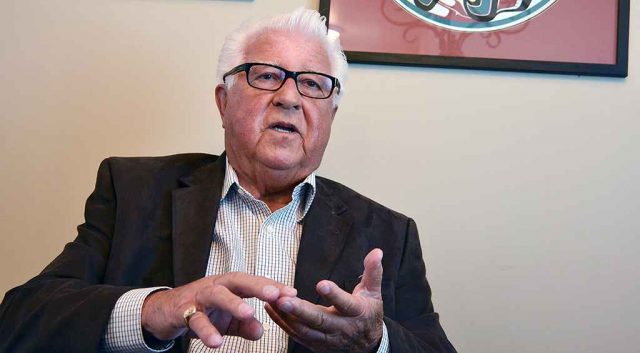 Andrew Delisle Sr. leaves behind a history not easily replicated and never reproduced, as the former Mohawk Council grand chief bridged Kahnawake’s history like no other. (Daniel J. Rowe, The Eastern Door)

Andrew Tanakohate Delisle Sr. was a community leader of the highest order, but he was also a father, husband, activist and incredible storyteller. His life spanned the creation of the St. Lawrence Seaway, the White Paper, Oka Crisis, and a plethora of other political and cultural events in Kahnawake and across Indigenous country on Turtle Island.

He was around when news was delivered on a rostrum outside the church by a spokesperson, to when you could get it on Facebook.

His achievements and stories about the man would fill this entire publication and beyond, and he has left the community with a void not soon filled.

Delisle passed away peacefully at the Kateri Memorial Hospital Centre Saturday July 6 at the age of 85 surrounded by his children, grandchildren, great-grandchildren, nieces and nephews.

Andrew’s eldest daughter Lynn spoke to The Eastern Door  about her father alongside her husband and Mohawk Council of Kahnawake chief Ross Montour.

“Our father was a public figure, and we gave up that relationship for politics, so we became immersed in the politics, which is why I say I’ve been involved in politics all my life,” said Lynn.

Andrew was elected to the Mohawk Council in 1960, and was selected “spokesperson” for the council in 1964, a position that would evolve into the MCK grand chief title. He remained there until 1982 (with a brief spell off council between 1972 and ’76).

Andrew’s second daughter Debbie gave the eulogy at his funeral yesterday, and spoke about the man behind the politician as a jokester and storyteller, always ready to teach a lesson through his stories.

“When I was about six, we were watching the moon out of the window above the kitchen sink,” Debbie said. “He got a jacket and told me that if I looked through the sleeve, I would get a better view, so I did. When I did, he poured a glass of water into the sleeve and it spilled onto my face and down my shirt. Of course, my immediate reaction was to get mad. He said that I had to learn to take a joke. I did, and today love to hear jokes, but maybe not all of them played on me.”

Andrew travelled and worked tirelessly, but would always take his children to Montreal for dinner when he was home.

“We learned to like all kinds of foods from different countries, and learned about the countries and people as well,” said Debbie in her eulogy. “He said that food is what brings a lot of people together.”

Many have spoken in recent weeks about Andrew as a link between the old Caughnawaga (as it was called) before the St. Lawrence Seaway and the one transformed by its creation.

In the post-seaway world, a simple pleasure such as fishing was something Andrew could not fully enjoy due to the way his community had been altered.

“It was very difficult for him to say, let’s go fishing and let it be fishing the way he used to remember how it was,” said Lynn. “He was always looking for the perfect spot and he never found it because the river was gone… He wanted us to experience what he had, but you couldn’t.”

Andrew was instrumental in halting the construction of a four-lane highway that would have run through Kahnawake from the Old Chateauguay Road to Highway 138. He was determined never to let another seaway project effect the community, and he permanently changed the way Kahnawake dealt with Canada.

As a leader, Andrew worked to create a council outside of the influence of Indian agents and other federal authority figures.

“He was a man for his times,” said Montour. “He was ahead of his time, but he was the right man for the time, and he carries us through to this period.”

Lynn spoke about living with her father at the Expo ’67 pavilion after he was appointed commissioner general of the Indians of Canada Pavilion. Lynn did not realize what a monumental figure her father was, and the extraordinary things he was doing for Onkwehón:we people across the country.

Andrew’s medals and accolades include the Order of Canada, Queen’s Jubilee medals, and many more. He was a founding member of the Indians of Quebec Association and National Indian Council, which became the Assembly of First Nations.

Debbie and all who knew Andrew knows that the medals mean little compared to the value he placed in serving Kahnawake.

“He taught me the importance of responsibility and community,” she said. “He felt bad sometimes that he wasn’t around often enough… I remember too, the work he did here in and for the community going himself to homes affected by flooded basements, helping families struggling with not having enough food and with his personal money.”

His example filtered down to his children’s children and beyond.

“I looked up to the way he really believed in his people,” said his grandson John Diabo (Lynn’s son). “How he would try and get both sides to stories when there was an issue instead of just one. He truly was a great man. I’m very proud to have had him as my tota.”

Debbie also spoke about her father’s ability to see both sides of an opinion.

“He said that it is not whether something is right or wrong, but that being truthful is most important,” she said. “There will be struggles with people who will try to pull you back, but if you stand your ground with respect and a good mind then you will have the strength to persevere.”

Andrew was married to the late Gladys Delisle, and the couple had three children: Lynn, Debbie and Andrew Jr.

Andrew Sr. was the son of life chief Joseph Delisle and his wife Josephine, and seemed destined to become a community leader.

“That sort of leadership he comes by naturally,” said Montour. “It’s his bloodline.”

In his post-political career, Andrew acted as chairperson of the Kanien’kehá:ka Funding Association and was an elder advisor at the MCK until 2014, and was a founding member of the National Indigenous Council of Elders in 2012.

After suffering a heart attack about half a decade ago, Andrew’s health began to deteriorate.

With his age and illness over the past couple years, the children, friends and other family members got to know another side of the man.

“We had our father back,” she said. “For me, and I’m not speaking for my brother or sister or anybody else, I was able to develop what others would have taken for granted: a father-daughter relationship.”

Lynn added as a final note that her father spoke often about his desire for harmony in Kahnawake in his final years, and how she hopes his example and final wishes can be achieved.

“My father saw, and he told me, through his life there are always going to be issues specific to Native people, for our people, and it seems the solution that we’ve never tried, that might be it, is to come together,” said Lynn. “The solution is with us.”

“One of the last things he said is he hoped we could find harmony,” said Montour.