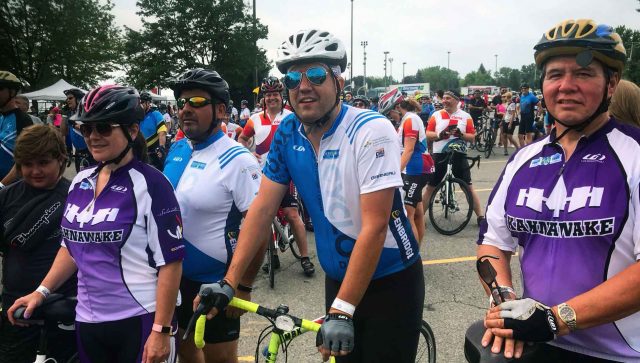 Tékeni Teiokahkwèn:te Rotihwí:seres (Gina Deer, Ron Guimond, Daniel J. Rowe and Carl Gilbert) returned to the Ride to Conquer Cancer this weekend as a team peddling for loved ones and Kahnawake as a whole, in the fight against the terrible disease. (Stephanie E.M. Coleman, The Eastern Door)

Among the crowd of thousands ready to ride through the rain and sun Saturday and Sunday, was a team that once included dozens from Kahnawake peddling on two wheels to help those trying to find a cure for a disease that has taken so many loved ones before their time.

Gina Deer spearheaded Team Kahnawake Cycling, which also went by Tékeni Teiokahwèn:te Rotihwí:seres, and added three members (including this author) to ride 200 kilometres in the 2019 Ride to Conquer Cancer.

Carl Gilbert rode on the team six years after last donning the purple Team Kahnawake jersey, and picked up a gold helmet for it being his fifth time doing the ride.

“It was hot and it rained. I felt pain, but it all would be okay,” said Gilbert after the ride. “It’s bittersweet to finish. You want it to be over, and, when it is, you wish it could last. The feeling of accomplishment, hoping that maybe this is the last year, the last year we would ever have to ride. Conquer cancer now!”

His wife and tireless fundraiser Mary McComber spurred Gilbert on throughout the ride and picked Gilbert up at the finish line in Donnacona, Quebec.

Deer’s husband Ron Guimond was the fourth on the team with my friend Eric Jean sort of an adopted member, keeping my pace high throughout.

“The ride is only a reflection of what people go through in their fight against cancer,” said Guimond.  “The morning of the ride, all 1,000 riders are like one big family. We are going to face a challenge together.”

The Kahnawake team raised $10,000 for the Segal Cancer Centre at the Jewish General Hospital, and gave a $1,189 donation to the local Tetewatatia’takéhnhahs (We Help Each Other) cancer support group.

“As a part of  Tetewatatia’takènhah’s  committee,  I was very happy and overwhelmed at the support that we get from our community,” said Helen Jarvis Montour. “We are so very grateful.”

Deer and Guimond admitted the ride was a touch gruelling having not ridden seriously in years, but both knew the muscle aches were nothing compared to what those who fight the disease go through.

“It was great to be out there, but physically, it was a challenge not having been on a bike in many years like that,” said Deer, who rode for her auntie Bev, who is currently undergoing experimental treatment for the disease.

“I had my moments of doubt, but persevered by reminding myself of those who are battling the disease. They were my driving force.”

For this author’s part, I had two names screen printed on my jersey for each day, though I know full well I could have had dozens of names, having met so many who have felt the disease’s awful touch.

My ma’ in law, Donna, and Jean’s mother Carole are both in treatment and fighting bravely, and were on my jersey for day one. Carole showed up at the end of both days’ rides, bringing a full complement of tears with her, as she smiled and hugged us both.

The second day was for my late pa’ in law, Dan, and auntie Marilyn, who both passed away after long and brave fights with the disease.

Aside from about an hour of heavy rain that all riders on this team pushed through, the temperatures, humidity and wind all behaved, and no one on the team suffered injuries beyond the aches and rashes of a 100-kilometre ride.