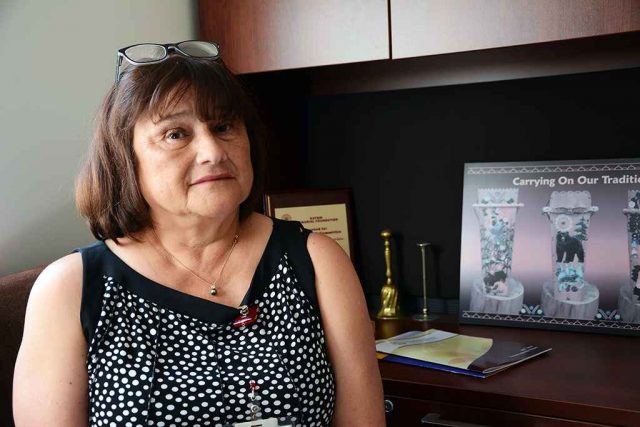 Just over four decades after she began her career at a previous iteration of the Kateri Memorial Hospital Centre, executive director Susan Horne is calling it a career at the head of the hospital. (Daniel J. Rowe, The Eastern Door)

Last Friday, Kateri Memorial Hospital Centre (KMHC) executive director Susan Horne ended her week as a full-time employee for the final time. Though she will remain at the hospital two-days-a-week until the end of October, her retirement ends over 40 years working full time at the heart of Kahnawake.

“People always ask me you must be counting down the days, but I usually say you know I haven’t even really taken the luxury of doing that because it’s such a busy job, and it’s going to continue to be busy right to the end,” said Horne.

Horne will remain on staff until October 30, as the final months of the hospital’s renovation and expansion project wrap.

KHMC director of support services Lynda Delisle will replace Horne as interim executive director until a permanent candidate is hired in the near future. The new ED is expected to begin his or her tenure at the end of September giving Horne a month to work with her replacement.

Horne walked through the doors of the hospital in 1977 as an employee for the first time. The building then was not what it is now, and the 22-year-old was happy to take a job as a receptionist in the clinic at the time.

“I really appreciated to be able to work in the community,” said Horne, now 63.

Horne switched to part time working Saturdays at the clinic in the early ‘80s after giving birth to children Angus and Sarah with husband Steven Horne.

She returned to fulltime and worked as prior executive director June Delisle’s assistant around 1983.

Horne was there when the new building went up in 1984, and saw first hand how leaders and the community at large worked to ensure the facility became a reality.

“To me that’s what Kateri hospital is; it’s a shining example of the will of the community,” said Horne, who again saw the community rally to expand and renovate the building starting in 2000.

“The government didn’t say, ‘Kateri needs to expand.’ We had to make those efforts and it was a long process again with the support of the local politicians, our board of directors, to get us on the radar because there were a number of priority lists,” she said.

Working under June Delisle inspired Horne to expand her role at the hospital.

“That gave me a real interest in the administrative part of the hospital,” said Horne, who remained assistant to the ED, while completing a certificate in health and social services management from McGill University at night.

“It was tough because I had young teenagers at the time,” said Horne. “That led me to the director position.”

Horne took the ED position in 1997 on an interim, and then on a permanent basis.

She had planned to retire earlier than this year, but wanted to see the expansion and renovation project completed.

“It’s something that I’ve been working on from day one (in 2000) when we sat with our management team and said our building is too small for us, and doesn’t include the growth we want to do,” said Horne. “That project’s been really important to me.”

Erecting drywall, paving walkways, putting up walls and all the other construction tasks are all parts of the project visitors, patients and people walking by can see for themselves. What many people don’t see are those, like Susan Horne, who are expected to continue working regardless of what’s going on around them.

“We’re all expected to continue delivering service when all this is happening alongside of us,” said Horne. “That’s been really challenging.”

Though challenging, Horne has been consistently impressed with how her staff rise to the occasion and roll with every move or construction stage time and time again.

“Everybody seemed to step up,” she said. “There’s that apprehension stage of it, but we have a really good team, and this place means so much to so many people. We’re going to go over and above.”

What does the local hospital mean to someone like Horne, who has seen it grow, change, adapt and evolve?

“I always say that we have a real ownership of this place,” said Horne. “The history shows that it was limping along in the early days where there were a benevolent group of nuns who worked in this place, and when they ran into financial difficulty, they decided to leave. The story goes that they left with everything except the beds that the patients were in, and then the community stepped up. People volunteered their time to work here.”

Horne remembers the fundraising in the early days, and the will people have to support the hospital emotionally, physically and financially. She pointed to the massive amount community members give during the annual Kateri Memorial Foundation golf tournaments that raise tens of thousands of dollars annually.

“That’s what’s been passed down to me about how important this place was for the community,” she said. “It was the community that kept it going.”

A half year after her husband Steven retired from his position at Tewatohnhi’saktha, Susan decided to do the same.

“It’s time,” she said. “At some point in your life, you have different priorities. I have a young granddaughter and her mother is starting out in her work career, and I always say, my mother was there for me.”