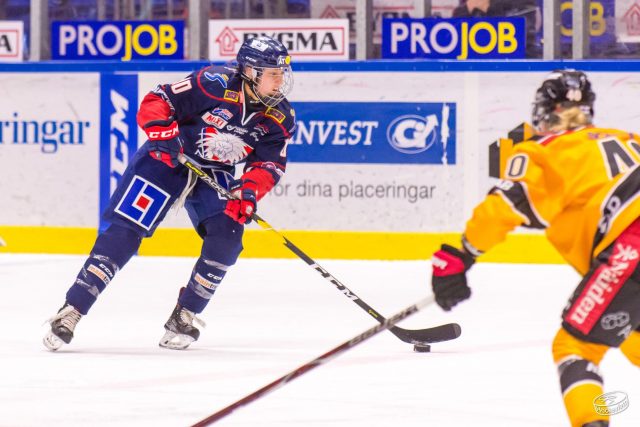 Fresh off her first stint as a pro in Sweden, local forward Brooke Stacey will pack her bags for Buffalo in the fall and play pro in the States. (Courtesy Brooke Stacey)

Friday was Brooke Stacey’s 23rd birthday, but the 5’10”, University of Maine Black Bear alumni hockey forward got an early birthday present a week early when she signed with the Buffalo Beauts of the National Women’s Hockey League (NWHL) last Friday.

“I’m pretty excited,” said Stacey. “It hasn’t really sunk in yet because it doesn’t feel too official yet. Once more players start signing, it will be more real.”

Stacey was looking at a couple of other teams in the six-team league before Buffalo came calling.

“Originally I was talking to Connecticut and New York, those were my two best options at the time, just for the location and whatnot,” said Stacey.

“Then my old coach from Maine (Richard Reichenbach) contacted me and said the GM (Mandy Cronin) wanted to speak with me.”

Cronin, a former Maine Black Bear, called Stacey “a force to be reckoned with” on the NWHL’s site.

She is signed until March 31.

Stacey is coming off her first games as a professional hockey player at the Swedish pro team Linkoping HC of the SDHL. Though the hockey was quality, being alone in a foreign country was not the easiest for the young prospect.

“I didn’t like how far it was,” she said. “I lived by myself in a little apartment, so I didn’t really interact with too many people. It was a lot of alone time, so I’m not doing it again, I’ve decided.”

Adjusting to the pro game also took some getting used to, as Stacey hadn’t played since her university season ended nine months prior.

“I found it took a couple of games,” said Stacey. “It was pretty hard. I think if I was right out of Maine I would have done better.”

Stacey has not decided whether she will attend the free agency training camp at the end of July, but will be with the team in the fall when preseason begins.

Stacey became famous in Kahnawake and beyond after playing for Team Canada in the Nations Cup in Germany a couple of years ago, helping her team to a silver medal.

Town was abuzz after she was selected previously for the 2017 National Women’s Development Team Selection Camp for Canada.

She is keen on getting in shape for the upcoming season knowing that being a professional athlete means yearlong commitment.

“I just started working out yesterday and I’m going to stay consistent,” said Stacey. “I have a gym now to go to, and it’s easier than working out at my house.”