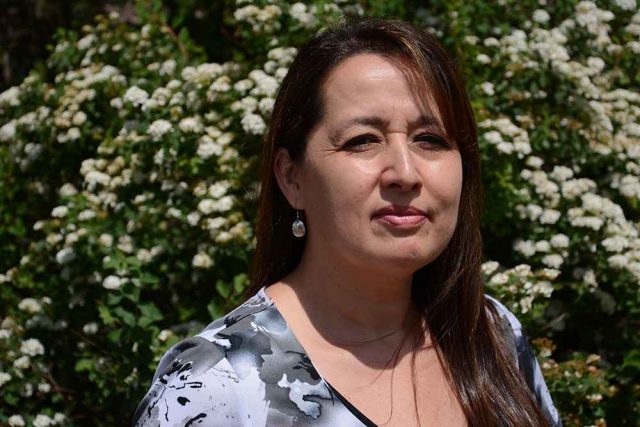 Melanie Gilbert is ready to take on the workload as the regulations related to the Kanien’kehá:ka of Kahnawà:ke Law comes into effect. (Daniel J. Rowe, The Eastern Door)

The Mohawk Council of Kahnawake accepted regulations regarding the KKR law Monday, in addition to enacting the recently read residency law.

Regulations related to the Kanien’kehá:ka of Kahnawà:ke Law include those respecting hearings, applications for recognition, the community review board, and the custom code.

Gilbert started the post last week, but has been involved with membership as a community member for around 25 years, she said.

“I’m just getting re-familiarized with all the information that was shared during all those hearings for the CDMP process,” said Gilbert.

“Anyone not falling under one of these will be considered illegally residing on the territory,” a news release read Monday from the MCK.

The table will now work to create regulations to administer and enforce the law.

“Now we officially have legislation that governs who can reside in the community,” said council chief Kahsennenhawe Sky-Deer who is on both portfolios.

In the previous 2003 Membership Law, both residency and membership were part of the law.

The two laws are linked, but not the same.

“If you’re not interested in becoming a member, but you qualify under the approved Kahnawake resident, then that would be an option for a person to apply,” said Gilbert, of the residency law.

The former director of MCK’s Lands Unit knows the job will come with a new load of challenges.

“With all the different laws that have come down from Canada and federal laws that are applying and people that are being registered at the federal level, who might assume that they are automatically registered at the local level, and that’s not the case. There is still a vetting process and a review process that has to take place with each of the applications.”

Since the council of elders was suspended in 2007, Gilbert said there are people who have waited to apply for membership. The registrar knows who these people are, and they will be contacted with new application forms.

Gilbert is ready to dive into the new position.

Full versions of both laws are available at kahanwakemakingdecisions.com.

“With all of the engagement that we went through with Bill S-3 (An Act to amend the Indian Act), I think people are welcoming that we will finally have legislation that governs who can reside here,” said Sky-Deer.