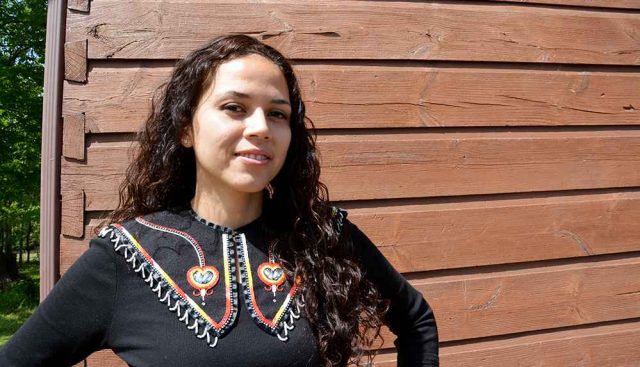 Kanien’kéha Ratiwennahní:rats Adult Immersion Program graduate Chelsea Sunday isn’t giving herself any time to celebrate her finished studies in the Kanien’kéha language. Catch her in Akwesasne planning and integrating the language and culture wherever she can. (Kahenientha Cross, The eastern Door)

Relaxing after a tough two years with the Kanien’kéha Ratiwennahní:rats Adult Immersion Program isn’t an option for graduate Chelsea Sunday. She has plans in the making and no time to celebrate her graduation from the language program.

“We didn’t skip a beat,” said Sunday. “You can’t sit around and wait for an opportunity to fall into your hands. I’m planning my life beyond being a student, I’m already in the work.”

Sunday and Shea Skye (featured in last week’s Eastern Door) are collaborating on a project where they go around Haudenosaunee communities and gather as much knowledge as they can on the language and culture.

Sunday was born and raised in Akwesasne and didn’t get the chance to immerse herself in the language while growing up.

“Kahnawake has worked really hard to include the entire community in their work when it comes to language,” said Sunday. “We have to make those pathways inside of my community as well (Akwesasne) as other communities, so I have to jump in. I have to get to work in the community immediately.”

Her motivation to travel and go through with the adult immersion program was to immerse herself as much as possible into her culture and learn the language for her kids.

“I was already working in the community in ceremonies and volunteering, but there was something missing. It was the language,” said Sunday.

“My children have been in immersion and I had no way to help them. I had to rely on the school to do their best, but when my children come home it’s English. I want to support my kids and I need to speak the language to do that.”

Sunday is thankful for the program allowing Kanien’kehá:ka from outside the community to participate in learning the language.

“By allowing people from outside the community to participate in the program, they got some flack from it, but my personal experience was that they were always welcoming,” she said.

“As corny as it sounds, they are my family. I never had reason to go to Kahnawake before, and now I just absolutely love the community. I wish I was from Kahnawake!”

Sunday’s two years in Ratiwennahní:rats will be with her for the rest of her life, she said.

“I feel like I followed what I was feeling and we just signed up. The experience was great,” said Sunday. “It’s because of my teachers that I came as far as I did. I’ve had nothing but great experiences from inside the program.”

Sunday’s experience motivated her to encourage and develop something of the same program in her home community.

“The goal for me would be to learn off those programs and bring the same thing here, because it works and their success in creating speakers at such a fast pace – it works,” she said.

Sunday wants to incorporate the language connections within Kahnawake in her plans for language developments in Akwesasne.

“In my time studying in Kahnawake, because the program has been doing it so long and has been successful, you can see the network that has been created throughout the community,” she said. “My ultimate goal would be to get he same program in Akwesasne, because all of our people who want to learn are leaving the community.”

When Sunday first applied to the language program, she didn’t know what to expect.

“I had absolutely no clue what I was getting into,” she said. “If you’ve never understood the language or never learned anything, you have no clue what exists. The biggest thing for me was how much the program changed the way I view myself and our world.

“I can’t stress what great work they are doing and how important it is for our people and for the health of our people,” she said.