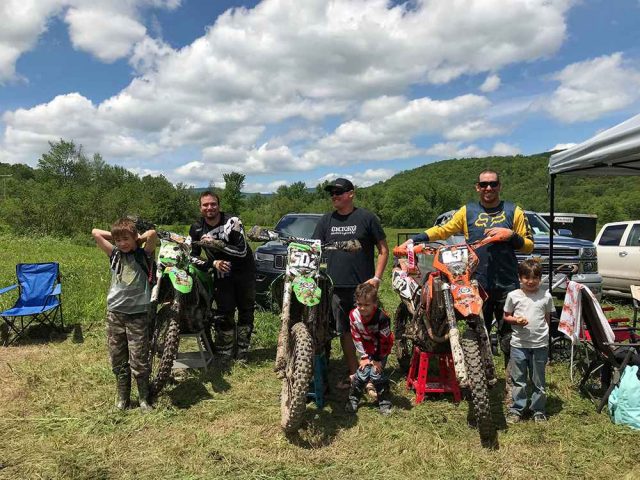 The three dirt bike stooges, Zander McComber, Sto Jacobs and Jesse Kane, had a muddy blast getting their engines dirty on the weekend. The adrenaline was high and they plan to continue riding and getting dirty. (Courtesy Zander McComber)

Three muddy musketeers took their chances on the dirt bike track in Masonville, Quebec Sunday and rode their way to the national level.

“I never experienced anything like this, and it was awesome!” said first timer Zander “Zdawg” McComber. Masonville was his first dirt bike race sporting no. 831, his son’s birthday.

“My goal was to do three laps at least,” said McComber. “I only ended up doing one. It was the hardest thing I ever did.”

McComber’s interest in speed and danger has always been running through his veins but with Kane’s persuasive ways, ‘Zdawg’ was able to experience the thrill of dirt biking.

“Hats off to Zdawg and big Sto for coming out and popping their cherry on this muddy hellhole,” joked Kane. “The race went the exact opposite from what we expected. We thought it was going to be a dry and fast run.”

His past rides in the FMSQ and the many mud baths from the brutal tracks left an itching for another adrenaline rush. McComber and Jacobs were his chance to run the track once again.

“It all started out last year while we were watching the Anaheim Supercross race on our couch in Brooklyn,” said Kane. “That was when I knew I had Zander and Sto addicted to this amazing sport!”

The racers had an hour-and-a-half time limit to survive as many laps as possible.

“I wasn’t expecting the race to be that hard, but I’m happy I finished a lap,” McComber, who plays hockey and fought mixed martial arts as a pro in the past. “Riding up the hills was insane, because once you stop, forget it, you’ll struggle to push the bike to the top.”

Fortunate for the brutes, there was some heavy rainfall the night before, making some perfect ground to cover the racers from head to toe in bountiful mud.

“The track was destroyed when we got out there,” said Kane. We never got out of second gear!”

A face full of mud right from the start does the adrenaline rush good, according to McComber, who’s already planning on registering for another race with the lads in August.

“We’re not going out there to break records, we’re just here to have fun and ride them bikes like we stole them,” said Kane.