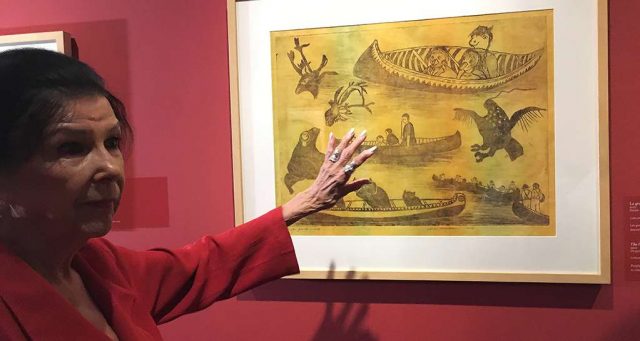 Award-winning Waban-Aki multi-disciplinary artist Alanis Obomsawin isn’t restricted when it comes to art. The first showcase of her etchings at the Montreal Museum of Fine Arts shows that her work with film and music isn’t where she draws the line. (Kahenientha Cross, The Eastern Door)

Waban-Aki artist  Alanis Obomsawin has a display of prints across the walls of Montreal’s Museum of Fine Arts until August 25. If you’re anything of an art lover, this exhibit is a must-see.

Obomsawin’s prints are rarely seen, and have only recently started to be displayed publicly.

“Alanis Obomsawin is an undeniable force of music and film,” said director general and chief curator Nathalie Bondil in the MMFA press release. “We are extremely honoured to be the first to unveil a major retrospective of her prints, and we thank her for her trust.”

“I’ve had the honour of her friendship for around 20 years, and this was long overdue,” said Goldfarb. “I chose Alanis because, frankly, she is a cultural powerhouse of the Waban-Aki.”

Obomsawin’s exhibition “An artist and her nation: the Waban-Aki basket makers of Odanak” is the first comprehensive retrospective of her prints in a Canadian fine arts museum.

“I did a series of mother and child engravings to honour women, who hold the highest power of all: to give life,” said Obomsawin.

The show highlights Obomsawin’s diversity as an artist.

“Few people are aware of her extraordinary work as a print maker,” said Goldfarb. “These prints really reflect her experiences of herself. She’s a powerful printmaker using dry point and direct etching, with a wonderful sense of colour.”

Obomsawin’s technique with dry point and direct etching goes against the norm. Instead of going about the craft in the traditional print first, acid bath after technique, she does the opposite.

“It’s an unusual way of handling etching,” said Goldfarb. “Her technique is how she gets these tonal fields, with all these browns and these different colours.”

A chunk of Obomsawin’s prints consist of dream depictions and nightmare narratives.

“I had all kinds of dreams that I would talk about the next day,” said Obomsawin. “My imagination was protecting me, I think.”

“The subjects she deals with are not only those of Indigenous people in general and some issues that they spoke about, but also her own dreamworld, which helped her get through her experiences as a young girl,” said Goldfarb.

Other prints are inspired from her Waban-Aki nation.

“I thought that this was all important to bring to the public,” said Goldfarb. “With all the intrinsic aesthetical power and importance, it also speaks to profound issues that Canadiens should address and understand.”

Goldfarb told The Eastern Door that he recognizes the artistic talent in Indigenous communities and is happy to be a part of the rising presence if Indigenous art across Canada.

“I think one of the wonderful aspects of that is she sees that things are changing, in terms of recognition and the beginnings of addressing these issues,” he said. “There’s a realization of the profound significance, not only culturally, but aesthetically, in Indigenous art work.”