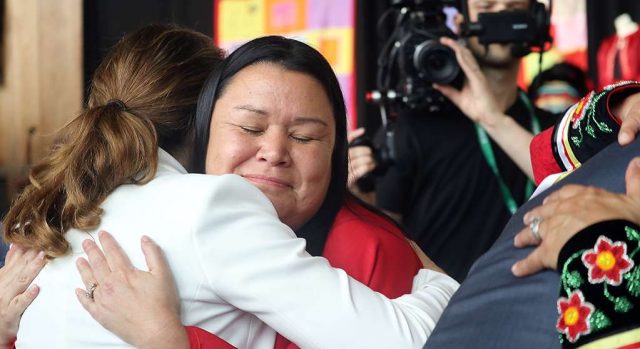 Melanie Morrison’s continued efforts to draw attention to her sister Tiffany and the thousands of missing or murdered women across the country resulted in the final report delivered last week. (Natalia Fedosieieva, The Eastern Door)

Commissioners for the National Inquiry into missing and murdered Indigenous women and girls (MMIWG) presented the final report to the public and government officials at a closing ceremony at the Canadian Museum of History in Gatineau Monday.

Entitled “Reclaiming Power and Place,” the report contains stories 2,386 family members, survivors of violence, experts and knowledge keepers shared over the past two-and-a-half years through public hearings across Canada.

“It means a lot for families,” said Melanie Morrison, sister of Tiffany, who was found murdered in Kahnawake in 2010 after going missing four years prior.

“We are talking about thousands of loved ones that are missing or have been murdered or abused; this is just one little thing that is being done; there is such an enormous amount of things that need to be changed and make it better for our women.”

The report includes the Calls for Justice, with 231 imperative demands for numerous levels of government, institutions, social service providers, industries and all Canadians.

The report is made up of three main parts (in addition to the findings of facts and Calls for Justice). The first section outlines the context; the second section focuses on the testimony gathered from families and survivors of violence; and the last one provides different models of healing and Indigenous-led practices.

The National Inquiry was mandated to examine systemic causes of all forms of abuses against Indigenous women, girls, and LGBTQ+ people, including physical, sexual, psychological, economic, cultural violence, stemming from the structures of colonization and systemic racism.

Morrison is on a national family advisory circle and hopes more essential work will be done with this report. It has been 13 years since her sister Tiffany Morrison was murdered, and the case is still active.

For Kanesatake activist Cheryl McDonald, being at the closing ceremony was an important step in her healing journey for the loss of her sister Carleen Marie McDonald, who disappeared and was found dead in 1988.

McDonald started publicly talking about her pain during pre-consultations for the inquiry and began healing almost three years ago.

After talking to the Surete du Quebec, the liaison officer got her file marked as a ‘suspicious death.’

She said despite the fact residential schools taught Indigenous people “don’t feel, don’t ask, and don’t tell,” now they are telling the truth.

“It is ugly,” she said, “But we have to shock people with genocide. I think we all have to wake up to the reality and look out for the kids.”

Chief commissioner Marion Buller said there is no reliable and accessible mechanism in Canada for Indigenous women, girls and LGBTQ+ people to protect their human rights.

“The Canadian legal system fails to hold the state accountable and is accountable for these violations,” she said.

“The significant, persistent and deliberate pattern of systemic racial and gendered human and Indigenous rights violations and abuses perpetuated historically and maintained today by the Canadian state designed to displace Indigenous people from their lands, social structures and governments to eradicate their existence as Nations, communities, families and individuals is the cause of murder and violence of Indigenous women, girls and (LGBTQ+) people. And this is genocide,” said Buller.

The research team worked hard, analyzing existing studies, and carefully reviewing all the evidence of systemic violence, and based on those facts they created recommendations to make change in the Canadian society, she said.

“Governments must fully implement the Calls for Justice to ensure safety and dignity of Indigenous women, girls and LGBTQ+ people,” she concluded.

In a sacred ritual, one of the copies of the report was swaddled and placed in a cradle board, symbolizing rebirth, new possibilities, and protection of the truths.

Prime minister Justin Trudeau accepted the copy of the final report and said he was “humbled and grateful” to receive it.

“Many people, non-Indigenous and Indigenous, many institutions will find this day, this report, these truths difficult, challenging, and uncomfortable,” he said, “This is an uncomfortable day for Canada, but it is an essential day; we need to recognize the truths presented here.”

Trudeau spoke about Canada in partnership with provinces and territories undertaking the most ambitious inquiry ever conducted in this country.

“For many decades,” he said, “Indigenous women and girls across Canada have disappeared, suffered violence or being killed and our justice system has failed them. Sadly, this is not simply a relic of our past to this day, the safety, security, and dignity of Indigenous mothers, daughters, sisters and friends, routinely threatened.”

Trudeau said it is Canada’s ‘shameful’ treatment of Indigenous women, yet, when asked by a person from the audience to say the word ‘genocide,’ ignored the request.

At the press conference afterwards, commissioner Michele Audette expressed disappointment, however, Buller said they don’t need “to hear the word ‘genocide’ come out of the prime minister’s mouth, because the families have told us, the survivors have told us their truths.”

Bernard Valcourt, a Stephen Harper-era minister of Aboriginal Affairs in the Conservative Party, criticized the report on social media.

“How far do those activists will go? (sic)” he wrote on Twitter. “What has been the cost to Canadians for this propagandist report? What have we learned that we did not already know? Who feels better in Canada among First Nations for that thunderous silly conclusion that all we wanted was to kill them all?”

“Let us remind you that you were the only person in the room that did not applaud the call for this Inquiry at the TRC closing event,” Moran replied on Twitter. “There are truths that need to be seen and heard. Listen to what women are saying.”

Trudeau, however, promised that his government would not allow the report “to sit on a shelf to collect dust.”

He said his government cooperates with Indigenous communities to improve health and wellness by investing in infrastructure and education, among others.

“Today is one more step on our path to reconciliation,” he said, “We will conduct a thorough review of this report, and we will develop and implement a national action plan to address violence against Indigenous women, girls, and LGBTQ2S people.”