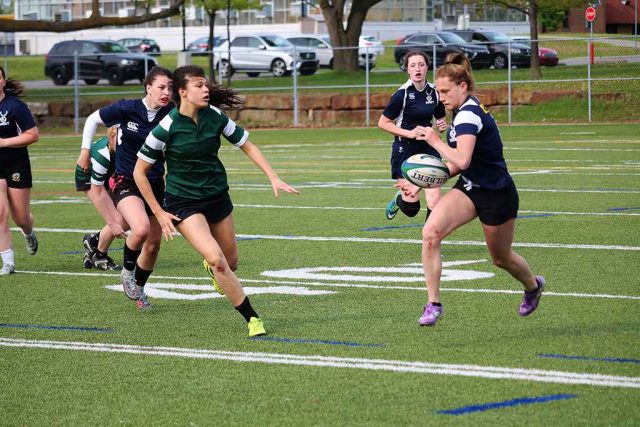 ECS forward Kelsey Lahache tore up the field during GMAA Juvenile final, tackling anyone who came within arm’s reach. Lahache is in her third year of playing rugby and has a 28-game winning streak going with ECS. (Tehosterihens Deer, The Eastern Door)

The GMAA (Greater Montreal Athletic Association) girls’ rugby season finished May 21 at the beautiful John Abbot College pitch, where literal blood, sweat, and tears were shed for the banner.

The team hustled the entire 80 minutes, and came out with a 41-25 victory against Laurentian Regional high School.

“I’ve been dreaming about winning this game for so long. Rugby is my absolute favourite sport and I couldn’t ask for anything better,” said Lahache.

The ECS ladies have not lost in 28 games, and Friday was their second year winning the GMAA banner for 10s rugby. ECS won the 7s banner this year as well.

It was Lahache’s third year playing rugby, and first experience playing in a gold medal match. Last year, she was unable to play in the final game because of a separated shoulder and torn AC joint, making this year win an even bigger deal.

“It is the best feeling in the world,” she said. “I’m ecstatic about winning for the second year in the row with the girls. We’re more than a team. We’re a family.”

Being the only player on the ECS team and in her grade from Kahnawake, Lahache did some great representation on the pitch.

“She is absolutely fabulous,” said coach Stephan Kaplan. “She’s improved every aspect of her game. She’s played for us for the past three years and she’s been a key player on the team ever since.”

Her parents were a little taken back when she asked to play the contact sport, said Lahache.

“I was really shocked when she decided she wanted to play rugby,” said mother Natalie Deer-Lahache. “We support her, but it’s a tough game, but they have a great team, a great coach and great camaraderie.”

“She’s got amazing potential, and she loves the game” said father Tim Lahache.

It was love at first hit when she made her first tackle.

“Rugby is literally my drug,” she said.

“The game went great. We played our hardest, but slacked off after the first half,” said captain Tristyn Mayo.

Mayo believed that the team could have won the banner if they would’ve stuck to the game plan and hustled hard.

“We should have just played simple rugby like we did the first half,” she said. “We shouldn’t have given up and got frustrated.”

Another reason for their loss of the banner was how many injuries HSB endured. By the end of the match, there just 10 girls with no subs.