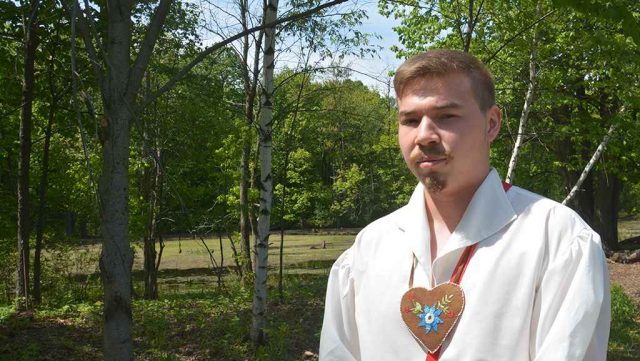 Kanien’kéha Ratiwennahní:rats Adult Immersion graduate Teiotién:taron River McComber’s goal is to revitalize the language, and have one of the many pairs of shoulders that will carry the language forward. (Kahenientha Cross, The Eastern Door)

Kanien’kéha Ratiwennahní:rats Adult Immersion Program graduate Teiotién:taron River McComber sat with The Eastern Door before his Wednesday graduation, and spoke of his journey in the language program.

“I grew up in a household without a lot of traditional influence, or whatever you want to call it,” said McComber. “I just took a liking to the language and culture.”

His parents Eric “Dirt” McComber and Paula Bauersfeld were a big influence with his education, and way of life.

“My dad did a lot of fishing, and trading with other nations, so I had an active interest in learning about all that,” he said. “It just went well with how we were.”

The start of McComber’s language journey was at Karonhianónhnha School where he had two 45-minute language classes a week, and was a part of the school’s singing group.

“I couldn’t tell you why I took an interest, I just did,” he said. “I never went to the longhouse, so I stuck with traditional singing.”

Kahnawake Survival School was up next where he continued his traditional singing interest, and took language classes. He took his first steps into the longhouse as a teenager.

“I went by myself, no family members, just my pals and I,” said McComber. “After that, I was all into the songs and the ceremonies, but I felt there was always something missing, and that was the language.”

When he was in his final year of KSS, McComber applied to the adult immersion program, but didn’t get accepted his first time around.

“I wasn’t the best in my tenth grade,” laughed McComber.

Plan B was to get his foot in the door with the transition program at Dawson College, where he spent his first college semester with his fellow Kahnawa’kehró:non in the Journeys classroom.

After a rough first semester at Dawson, McComber decided to apply for the immersion program again.

Now he’s a Ratiwennahní:rats graduate, and plans to teach the language and hustle his way through revitalization.

“It was the greatest thing ever,” said McComber of the two-year program. “It takes a lot to learn a language at such a young age, especially our language. You just have to hunker down and focus, because it’s a lot to take in.”

He said to learn the language, you have to challenge yourself.

“Everybody’s scared to talk right away, but that’s how we make strong relationships,” he said. “There lies the awkwardness in the language.”

Eventually, McComber got over his fears and started having some fun with the language. When introducing a song in the longhouse, or speaking in class, the class tried to one-up each other by using “the best words,” he said.

“There’s this friendly competition, and where there’s competition, there are better speakers,” said McComber. “We really just like finessing the language.”

Joking aside, learning the language carries a heavy responsibility for McComber.

“Once you’re committed to the program and committed to learning, you become one of the shoulders that carry the language,” he said. “People at our age have to set an example and bring the language into our household.”

McComber plans to teach the culture and language wherever he can to keep the momentum going.