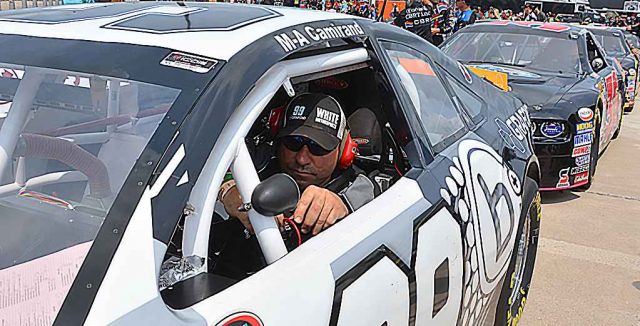 Brandon White is in the race of his life against cancer, but the 43-year-old racer is not ready to let the disease slow him down from reaching out and helping others dealt the same raw deal. (Daniel J. Rowe, The Eastern Door)

Sunday at the Jukasa Motor Speedway in Hagersville, Ontario, one race car lined up in the latest 2019 NASCAR Pinty’s Series with a driver, who was trying to beat the other cars on the track, while fighting a much tougher battle within his body.

Brandon White was behind the wheel of the No. 4 car with a yellow spoiler and yellow skirt as the local racer shows fans what a warrior fighting cancer looks like.

White was diagnosed with rectal cancer after doctors discovered a large tumour on his liver in June 2017.

White was in the shape of his life at the time, hooked on crossfit and going almost daily to classes.

White changed his diet, took extra vitamins, but could not recover his edge, and eventually was forced to stop training.

“One day I was doing my usual sit ups, and I had a massive pain behind my ribcage,” said White.

Thinking he pulled a muscle, White went home, but the pain intensified while he was working on his race car. Aspirin did nothing either, and he woke up that night soaking wet with sweat. He drove himself to the Kahnawake Fire Brigade, and had an EMT drive him to the hospital after checking him out.

“It was like a knife in my side,” said White.

Doctors did a CT scan, took blood, and six weeks later he got a call.

“The doctor opened the file, he looked and his eyes went (wide), he picked me up and said, ‘Brandon, we got to go’,” said White.

In oncology, he knew the news was going to be bad.
“I still remember his voice, he has a deep voice,” said White. “He said, ‘Brandon. We have some very terrible news. Do you have someone we can call?’”

The doctor called Brandon’s partner Laurie Jacobs, and told the couple he had a serious seven-inch tumour on his liver that, if not treated, would mean Brandon had eight months to live.

“I’m shocked,” said White. “This is like five minutes from seeing the other doctor to him breaking the bad news to me.”

White and Jacobs took a pragmatic approach to the chemotherapy, surgery and dramatic alteration of their daily schedule.

“We took it one day at a time,” said Jacobs. “We really just didn’t know what we were getting into.”

The source of the cancer was in Brandon’s rectum, which also required surgery.

A combination of chemotherapy and surgery continued for months until last fall.

“After we had Teho, boom, I got sick right after that,” said White.

Jacobs went to work immediately educating herself on what foods are best, and keeps on top of meals and finds ways to swap typical meals with more healthy options.

“We’ve been trying to be creative in that way,” said Jacobs.

“It’s a process where you have to prepare your own self; take a deep breath and then say, ‘okay, we have to do this,’ and it just takes time.”

The battle is not over, but White is determined to regain his health and control of his life. He remains in treatment for the rectal cancer.

White plans to be active encouraging people to notice signs that you might have the disease. Sometimes the signs are physical, while some can be emotional.

White knows many in the community have either suffered from the disease or been forced to care for someone undergoing treatment.

“Support is number one – family support – and I have lots of that,” said White.

Hospitals have support groups for cancer patients, which Jacobs recommends attending, and the local Tetewatatia’takéhnhahs (we help each other) group has funds available to help those fighting the disease.

“We know first-hand the financial toll that cancer has on those going through treatment,” said founding member Anna Mae Rice.

The group has helped 27 patients and families since the eight women founded it in 2016.

Jacobs added that those suffering through the illness can help themselves as well.

White added that exercise helps, and getting over ego when first diagnosed.

“I was kind of embarrassed over the past two years. I’m young, and I got this?” he said.

Opening up about the disease helped White, and it’s something he wants to pay forward.

“If I can help one person, my job is done, but I want to help multiple. I want to help everyone I can…I want other people to educate themselves because early detection is the key,” said White. “I was just dealt a bad card.”