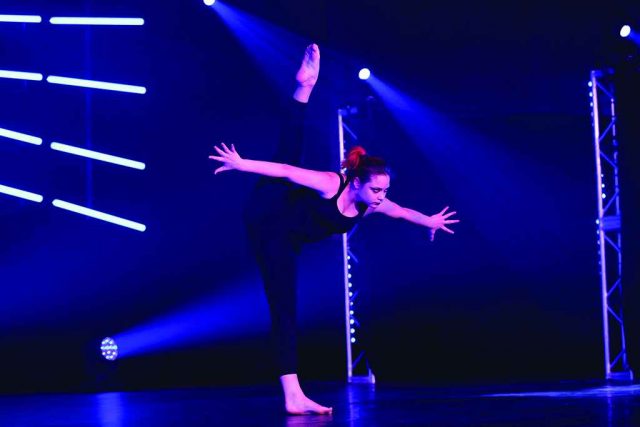 Ryleigh Mayo, 12, is one of two local dancers that are turning heads in one of the most demanding and difficult artistic forms in the art world. (Courtesy Dana Marquis)

Some think they can dance, but for two young women in Kahnawake, the appropriate title to any show featuring them would be: You know these girls can dance!

Contemporary dancer Ryleigh Mayo and hip hop mover Shaelyn Diabo have been showing off their incredible dancing skills of late, and dominating the dancing scene.

“Every time she dances I cry,” said Mayo’s mother Dana Marquis, of her daughter’s ability to move and emote in one of the most demanding artistic genres.

Shaelyn has been hip-hop dancing for seven years and has become a dancing star after years of competitions and trophies. She and her dance troupe Remixed Unit from Extravadanse Studio in Chateauguay won first place in the iDance Competition in Brossard at the beginning of May.

Shaelyn competes with her group in the 14 to 15-year-old category for hip-hop dancing, and won in the prestigious and competitive Hit the Floor Dance competition in Levis, Quebec May 17. She also came in second place with her troupe Impulse in the Hip Hop Large Group Intermediate category.

“My wife Lindsay and I are extremely proud of her and her troupe’s finishing no lower than third this year in very competitive divisions where at times there are 20 plus troupes in her category from all over Quebec, Ontario, and upstate New York,” said Louie John.

“She has been hip-hop dancing competitively for four years now and dancing for eight.”

Shaelyn trains five days a week after school and is currently preparing for the Hip Hop International Canada Championships, which take place in Montreal on Sunday.

The winner will represent Canada at the world hip-hop dance championships.

After placing well in a number of competitions in 2018, Ryleigh teamed up with Meldane Benoit to enter contests as a duo in 2019, in addition to competing in as many events as her body could handle

Ryleigh competed in the iDance competition in Brossard for contemporary dance, and received a $200 scholarship to the Toronto Underground dance company for an improv contest, and also placed second in her duo and group category. She placed at RepreZent in early April, nabbed a first place for her group and two second places for solo and duo at 5-6-7-8 Showtime, and nabbed a third for her duo at Hit the Floor.

Ryleigh has been dancing for three years after switching from gymnastics.

“I was in gymnastics since I was eight, and I never really gravitated towards it, so I stopped and thought I should try dance, and I’ve been in it ever since,” said Mayo.

Her solo and duo performances at Showtime gained the 12-year-old star an invite to the Dance World Cup in Whistler, BC.

“I’m beyond excited, it’s insane to go across Canada to compete with my best friends and my studio,” she said.

Her biggest fan and supporter never misses a competition, and is excited to see her daughter continue to impress in the future.

“I’m super proud of her, and we cannot wait to see what’s in store for Whistler,” said Dana.

Ryleigh will also be participating in Nationals, which take place right before the world cup in Whistler.