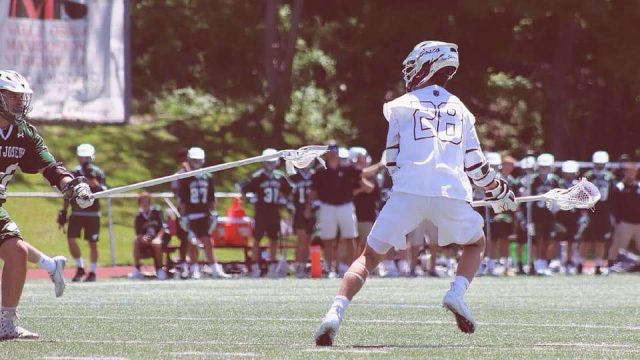 Freshman Koleton Marquis is bringing his A-game to the field when it comes to varsity lacrosse playing his heart out and proving to his coach and peers that he’s got what it takes. (Courtesy Koleton Marquis)

Nothing feels better than going into a do-or-die match and coming out victorious – not to mention scoring the winning goal in the last 14 seconds of the match.

Lacrosse star Koleton Marquis can tell you all about that with his experience with the Don Bosco Prep School Ironmen.

The first match for Don Bosco Prep’s state championship was May 18 against St. Joseph, an easy 20-2 win for the Ironmen, knocking their first opponents out of the championship.

“It was an easy game for us, and an easy bye for the second round,” said Koelton.

This past Wednesday was the day Koleton was stressing about throughout his week, knowing he would have to play the game of the season.

The Varsity boy’s lacrosse team and Koleton were heading into their toughest match yet with a handful of their key players out of commission.

“They were not looking too good,” said Tawenrate Marquis, father of Koleton, after explaining that the team captain and an additional three senior players are down for the count.

“But you can never know, they could always dig deep and put Bergen Catholic out of the competition.”

The lacrosse lads pulled through and played against the odds, winning their match 11-10 against their biggest rival in New Jersey state area.

Bergen Catholic beat Don Bosco in the regular season in a close 7-6 loss, leaving the boys agitated and wanting revenge, which they eventually succeeded in by knocking Bergen out of the state championship.

“They beat us at the beginning of the year at our home field so we’re hoping to end their season on their home field,” said Koleton before he marched his way into enemy territory and dashed all of Bergen’s hopes of progressing in states.

“It’s crazy,” he said, after winning the game. “I have no words to describe how it felt.”

“I feel proud because he was able to be scouted out and be able to play on the varsity team as a freshman, it is a big deal,” said Koleton’s father.

Koleton is in his freshman year at Don Bosco and played his first season on the freshman team, only to then be moved up to the varsity team after finishing his rookie season.

Koleton’s awesome achievement got him an interview and shootout on the Varsity Aces’ Twitter page, along with a just as awesome a clip of his game-winning goal.

Their next match is against another foe to fear, Seton Hall Prep, a nationally-recognized team and ranked the top team in the state.