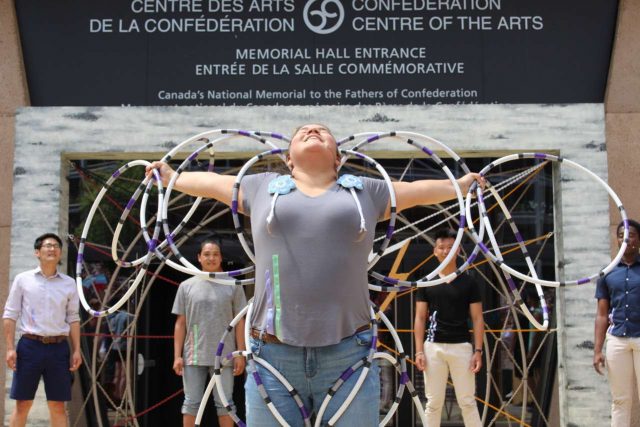 Wahsontí:io Kirby will bring her acting, singing and overall creating skill to PEI again this summer, as she engages with the island’s visitors through theatre. (Courtesy Wahsontí:io Kirby)

Kirby will take part in the Confederation Centre Young Company for the second year in a row, a performance-based training program focused on sharing participants’ life experience and stories that define the country.

“You get together and create a show together then talks about Canada’s history in a very true way,” said Kirby.

Diving into such heavy topics was intense, but valuable for the diverse theatre students.

For Tahatkathonnions Bush, the experience was life changing.

“It was one of the most influential experiences I’ve had,” said Bush, who joined Kirby last year. “The amount of people I met, the awesome networking, but most important the family I made there, the other youth in the program were some of the most caring, talented and diverse people.”

Participants (musicians, actors, writers) in the program audition across Canada, and all come with experiences the troupe learns from.

“You learn how a lot of the struggles, a lot of the trials are similar,” said Kirby. “To find that commonality instead of being separated from each other, and to do that through a show, it brings everybody together in its own way. It was really nice to have that and to realize that things are more similar than they are apart.”

Throughout the summer, the members of the troupe will present their work on an outdoor stage in Charlottetown.

“It’s kind of an education/theatre piece,” said Kirby. “It’s kind of like a theatrical revolution especially in the way that musical theatre has been before.”

Performing in the vacation hotspot Charlottetown in peak summer tourism season means performing for a global audience often unaware of the issues the troupe addresses.

“They had never heard of half of these issues before, and some of them were coming off cruise ships from Europe and had only heard of very stereotypical depictions of Indigenous people, and hadn’t really had any black people in their lives or Asian people in their lives,” said Kirby of last year’s crowds. “Listening to their stories and everyone’s individual voices, it opened them up and made them realize so many things that they hadn’t realized before.”

Kirby and Bush said visitors and participants were receptive to the show often sticking around to chat with the performers.

“To see them be excited over something that I’m so excited for was the best,” said Kirby, who will enter her third year at the National Theatre School of Canada in the fall.

Though he won’t be returning, Bush highly encourages others to engage with programs like the Youth Company.

“It’s so important to travel and meet new and amazing people, and I believe that program was an opportunity to allow me to do so where I wouldn’t have been able to,” he said. “It’s also important to any and all theatre students or youth who just love singing, dancing, performing or just being on stage to learn important skills in the theatre business.”