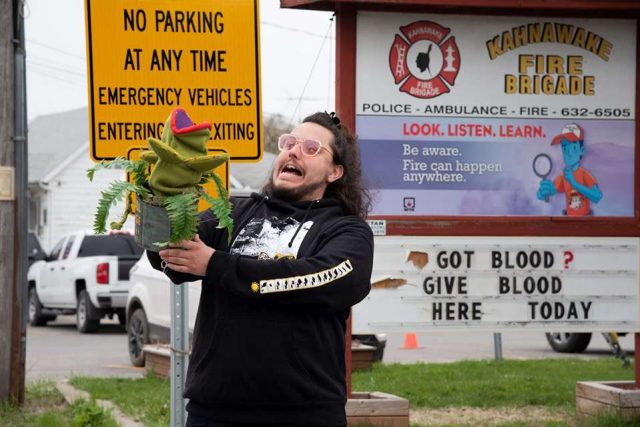 Who doesn’t love a sing-along comedy that leaves the audience gasping for air after a good laugh? The answer is people who don’t want to witness the upcoming play by Starcatcher Productions.

For those of you who haven’t experienced the greatness of the musical Little Shop of Horrors, the classic play is about a lad who accidentally raises a man-eating plant. The only nutrition the bully plant accepts is blood, and sometimes people.

Originally written by Charles B. Griffith for the stage, the most popular version is the 1986 film adaptation by Frank Oz and Howard Ashman, starring Rick Moranis as the unfortunate owner of the carnivorous plant.

The brains behind Starcatcher chose the play because of its community-friendly vibe.

“Following the show we put on last year, we wanted to keep the musical theme rolling when it came to selecting what would come next,” said director Dennen Phillps. “After narrowing down our picks, Little Shop was the one that seemed to make the most sense to do.”

After last year’s hugely successful Holy Musical B@man!, the Starcatcher crew decided to go with a play some may already be familiar with.

“This year we wanted to try something a little more established, and Little Shop of Horrors is one of the most commonly produced plays,” said musical director Gage Diabo.

“It fit within our wheel house of doing sillier and fantastic shows!”

“Starcatcher was the result of the void that was left after Turtle Island Theatre Company went on hiatus. We all loved doing theatre, but then it all just stopped after that. After a few years, a bunch of us got together and came up with what is now Starcatcher Productions,” said Phillips.

“The Turtle Island Theatre Company are friends of ours and we will be working together once the new theatre is built in Kahnawake.”

Auditions for Little Shop are tomorrow and Friday starting at 6 p.m. at the Kahnawake Legion Branch 219.

“Everyone will be expected to read from the script with others, participate in a short dance routine, and sing a song,” said Phillips.

For anyone unable to attend the auditions on the above dates, there is the possibility for a private audition. It’s as easy as contacting the directors and confirming a date before May 26.

“We’re looking for performers who want to have a good time entertaining an audience. Seasoned or amateur, auditions are open to those who want to try something new and interesting this summer,” said Phillips.

“If you want to try out acting, dancing, or singing, this may be your time to shine. Auditions and the stage can be a bit nerve-racking to some, but we make sure to make every person as comfortable as possible when it comes to performing.”

Diabo is hyped to see who will be acting in the play.

“It always exciting heading into audition because you never know what kind of talent is going to pop up out of no where,” said Diabo.

“It could be people you have never met before blowing you away with what they can do, or someone you have known for a while that is showing these colours inside of themselves for the first time.”