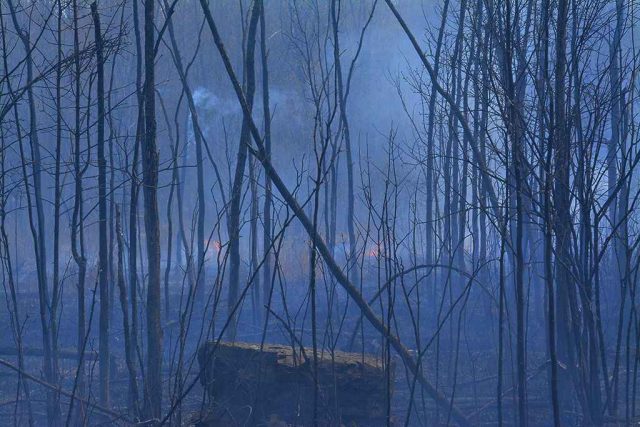 A brush fire on Highway 132 last Thursday near Survival School was the just one of many this spring emergency services are growing increasingly frustrated with. (Tehosterihens Deer, The Eastern Door)

“It’s exhausting and it’s frustrating to have to deal with this all the time knowing that it’s totally preventable,” said Scott. “You come out at night, and you don’t know. There’s accountability. I need to know where all my guys are, who they’re with, where they are. They can’t see.”

Scott said his staff responds to intentionally lit brush fires at least once a week.

According to the report from the Kahnawake Peacekeepers, a call came in just after 7 p.m. Tuesday night (May 7) about a major fire near Goodleaf’s Tire and Auto shop on Highway 138. All PKs responded, and the KFB was paged. At just before 8:30 p.m., Scott ordered the power cut, as the flames were between 60 and 80 feet in the air and near major power lines.

“We had to cut the power last night to a major transmission line because my guys were working right underneath it, and I couldn’t accept that risk,” Scott said Wednesday. “It effects the whole town after that. People are stressed because the power went out on a nice day.”

The fire was contained eventually, and the power was turned back on just before 9:30 p.m.

The night was not over for the KFB, however, as several calls came in about a brush fire by Tower Line Road off Route 207, and fire fighters worked over the next two hours to put the blaze out.

A fire broke out Thursday (May 9) near Kahnawake Survival School sending huge plumes of smoke into the air, and further frustrating the men and women tasked with putting it out.

Three of the seven fires since April have been “all calls,” where all fire fighters are needed to respond, Scott said adding that outside fire brigades were called in to help, and that one fire fighter has been injured thus far.

PK chief Dwayne Zacharie said the fires are being deliberately set and that files are open.

The train track road will be graded with new signage in place stating the road is for local access only.

“This is a major public safety issue in the community,” said emergency preparedness officer Kelly Ann Meloche. “Not only does it put the lives of our emergency workers at risk, it puts your children and your families lives at risk.”

Smoke inhalation can cause major issues to health in addition to the clear risks raging fires cause to property and infrastructure.

Council chief Lindsay Leborgne said responding to fires costs $1,000 per hour, and that cutting power can be extremely dangerous to vulnerable people.

“There are people that need electricity to run oxygen machines,” he said. “It stresses our elders, (and) there are dozens of things that could go wrong.”

Scott said the large amounts of rain and flooding from winter run off does not provide security from wild grass fires.

“It can rain one night, and the next night, the bulrushes will just burn,” said Scott. “They don’t seem to hold the moisture and it’s just like straw.”

PKs are asking those with information to call the station or the anonymous tip line at 450-632-2802.

Fighting 50 or 60-feet flames in a swamp at the middle of the night when winds can change drastically at a moments notice is a reality that Scott would rather not face for another year.

“If we have a summer like we did last summer, we’ll be out responding to stuff like this right into August and September,” he said.