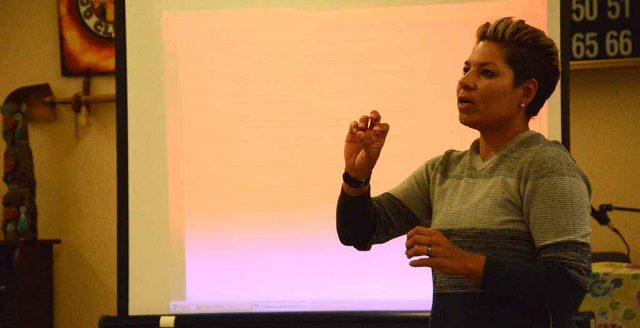 Kahsennenhawe Sky-Deer explained that though there was a very poor turnout, the amendment to the Residency Law would go on to the next stage of the expedited process. (Daniel J. Rowe, The Eastern Door)

The Kahnawà:ke Residency Law is all but in the books, as the Mohawk Council of Kahnawake held a final consultation on a single point last Thursday at the Golden Age Club.

On May 2, just three community members showed up, as facilitators Joe Delaronde and council portfolio lead Kahsennenhawe Sky-Deer explained that the law’s technical drafting committee requested the meeting after changes to the definition of Onkwehón:we ancestry were found to be problematic.

As read now, Onkwehón:we lineage “means direct descent from at least two great-grandparent, who were or are recognized as Ahsén:nen Onkwehón:we lineage verified by proof acceptable to the registrar, and, if necessary, by the administrative tribunal.”

“With the effects that it would have on other sections then you’d have to bring back the whole law and do it over again,” said Delaronde. “I don’t think anybody wanted that. I think you saw after two meetings of pretty heavy discussion that people were pretty happy, but upon further review, as they say in the football games, there were some details that were problematic.”

There were few questions about the point, and the discussion mainly centred on other parts of the law that had already been discussed.

The residency law is in the urgent tract of the Community Decision-Making Process (CDMP), and will be posted on the CDMP website for two weeks before the law’s final reading. The urgent track is designed for fast-track legislation needed to counter exterior threats, which council sees in the federal government’s Bill S-3, which has received Royal Assent in Ottawa.

The law’s passing is not the end of the line, however.

“Once it gets passed, in one year we’re going to go through it in its entirety similar to what we did with the membership law,” said council portfolio chief Kahsennenhawe Sky-Deer, who added that a registrar has been created and staff will start training June 10.

“We still have some regulations to develop,” said Sky-Deer. “After that, we’ll have one year to resubmit it and come back, so that if there are areas that aren’t working right, maybe they were too lax or too strict in some areas, maybe we can make amendments, but it doesn’t mean we leave the community in a vacuum. The law will be in place similar to what we had with membership.”

Bill S-3 (An Act to Amend the Indian Act in response to the Superior Court decision in Descheneaux v. Canada) is meant to eliminate sex-based discrimination in the Indian Act and provides persons with Native status if they are descendent of a woman who married a non-Indigenous person between 1876 and 1985 and lost their status, as long as the descendant was born before April 17, 1985.

Adding names to the federal band list, council says, will affect who can reside in Kahnawake, and thus a residency law was needed.

“We really had no mechanism for giving people permits to be here or even to remove people from the territory through a fair process, a court order or something like that, so we said let’s separate them,” said Sky-Deer.

Having a residency permit would not mean the person was necessarily on the Kanien’kehá:ka of Kahnawake Membership list.

Monday at the Peacekeeper Station, membership technician Alan John Rice led a discussion of some of the regulations that will go into place when the law takes effect.

Rice said staff will begin training to implement the regulations from the Kanien’kehá:ka of Kahnawà:ke Law in June, and the community review board should be in place by early August.